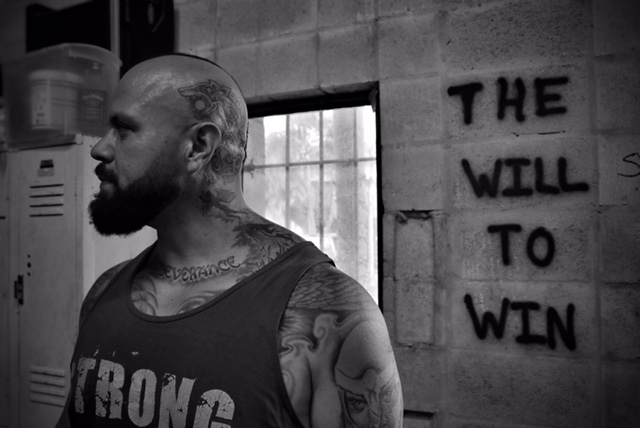 It’s 3 weeks post-op and my bicep is almost at full extension. Pain has diminished greatly and I’m finding my bicep brace and general movements to be more and more bearable. Mornings suck. Getting dressed sucks. Not doing Strongman sucks… but you know what doesn’t suck? Having the ability to step into the gym every day for a chance to get better because that’s champions do right? They show up.

Every training sessions starts with this generic term “Mind Set”. Often seen all over Instagram on countless black and white memes with some impossibly huge dude or some fully loaded bar with weight that wasn’t actually squatted… but my bicep is torn and my spine is “different”, so now what? What do I say to myself? What do I plan when all my planning is planning on planning? When every step, lift, bend, and turn can potentially piss of my back for good or re-injure this Lucky Fin of mine. Well, it’s not always about that saying. Instead, it’s about the bitter taste of acceptance, of not running away from the obstacle at hand and the discipline of accountability. Every day I step into the gym is a beautiful reminder that I am one step closer to that battlefield. It is a visual representation of what I have dedicated my life to becoming. It doesn’t matter whether its a single arm press, a leg curl I’ve avoided for years or a lightly loaded hack squat. I am the guy who is making that one arm hammer curl look like its the last PR of his life. My mind set is that of a wounded animal. Dangerous yet cunning. Willing yet acting on strategic hesitation. I am biding my time healing wounds to allow my mind and my body to unleash in full force when the time is earned. My mind set comes from the acceptance of the hardships I have caused on myself and the ever lasting love of going to war with them on a daily basis. No matter how large and physically limiting or how mentally staggering it can be, mind set comes from acceptance, accountability and self courage.

As with all the members of the broken bicep club, the safety Squat bar is going to be in my arsenal for the time being. I have the ability to flex and squeeze my right arm which allows for a decent amount of bracing. Due to only one arm being available, Brian and I have been approaching the back squat very carefully and continue to err on the side of caution while moving forward. I’m continuing to follow the 10/20 protocol we used during major back rehab and de loading every 3rd week without question.

If you’ve read my previous blogs, Instagram or know me in real life, some of these words might come off as repetitive or dramatically consistent. At times I can get so lost in real life stressors that the constant reminders of my mental mantras and uniform words are my guiding stars. Within the realms of training, consistency breeds discipline and discipline is the building block of mastery. I hope that some of you reading this find solace in the battle of hardships. That progress  starts when you wake up and is only fueled the moment you walk into the gym. The battle back from injury, doubt and fear is won the moment we become accountable and plan accordingly with our programing and the proper mind set to execute what needs to be done.

Never Stray From the Way