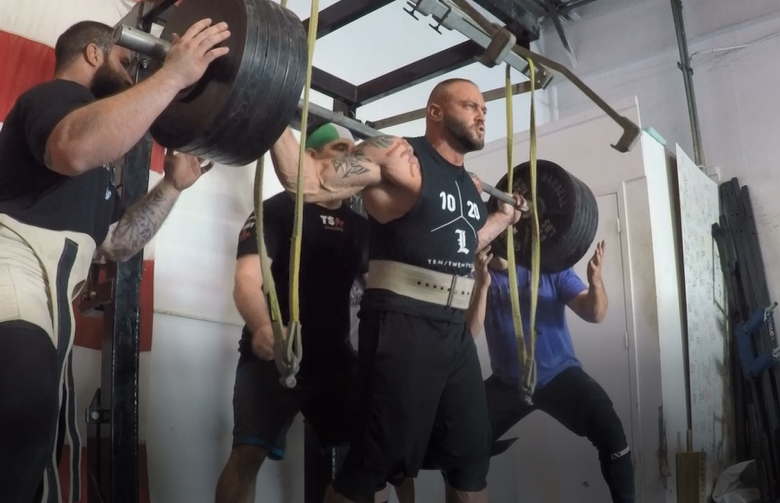 Back to training. I recently “competed” at the XPC on March 3rd, but did not get to finish the meet. I have my sights set on a meet on May 26th in Orlando, and will begin my prep for that next week. Typically after a meet I like to have a decent off season to build myself up a little bit before entering a meet prep, but in this case I didn’t finish a meet and made a decision to jump right back into a prep for what I know will be a much more successful meet. Strength wasn’t the issue, it was a bunch of technical faults during prep that caused me to have a terrible meet. May 26th, redemption is 1o weeks away at this time.

Before this week, I hadn’t touched a weight since March 3rd since I took a nice long vacation after the meet. I suggest everyone take some time like that if possible after a meet, but I’ll touch on that in an article at a later point in time.

Monday March 12th was my first day back in the gym, and I decided to do a bunch of high volume sumo pulls just to get my legs back into the swing of things. I warm up and cool down with the McGill Big 3 before and after every training session for core stability, one of my big weak points. I felt pretty strong just doing pulls of 405 for sets of 8, and followed up with some DB rows and light leg presses.

Thursday I decided to have some fun and see what I could comfortably hit raw on bench press. I changed my setup on bench to something where my butt would be next to impossible to come off the bench. I never want to bomb out on bench for that reason again, and I found a comfortable setup that I am going to stick with for a while. I hit a pretty smooth PR on bench of 365, something I hadn’t even tried before since I usually was stuck around the 350 mark in my last raw meet. Got fairly excited about how it moved so I naturally threw a bench shirt on and hit 5 plates to a 2 board. During meet prep for XPC, I missed that weight more than a few times in training. I was happy with those for that day and didn’t want to push my luck, I’ll get after the heavy benches with my new setup in the next coming weeks. I followed up those benches with some close grip sets of 5, and some banded tricep pressdowns.

Sticking with the off week of raw fun stuff, I came into Saturday with the idea of hitting a comfortable raw squat. It’s been a while since I’ve done any heavy(ish) raw squats but they felt good all day. My best raw squat in a meet was 611, so I worked up to 600 for a good single. It moved very well, but I held back from going any heavier. I’m definitely comfortable with what I can still accomplish raw. For me, the satisfaction of hitting a raw PR just does not match the satisfaction of finally hitting an equipped PR.

I usually never go off the plan of my programming, but I wanted to see where I was at before starting prep next week. I’m happy with where I am at, and look forward to starting my preparation for this meet in 10 weeks. I definitely see myself going over the 2,000lb total mark that has been escaping me for the last few meets that I have done.