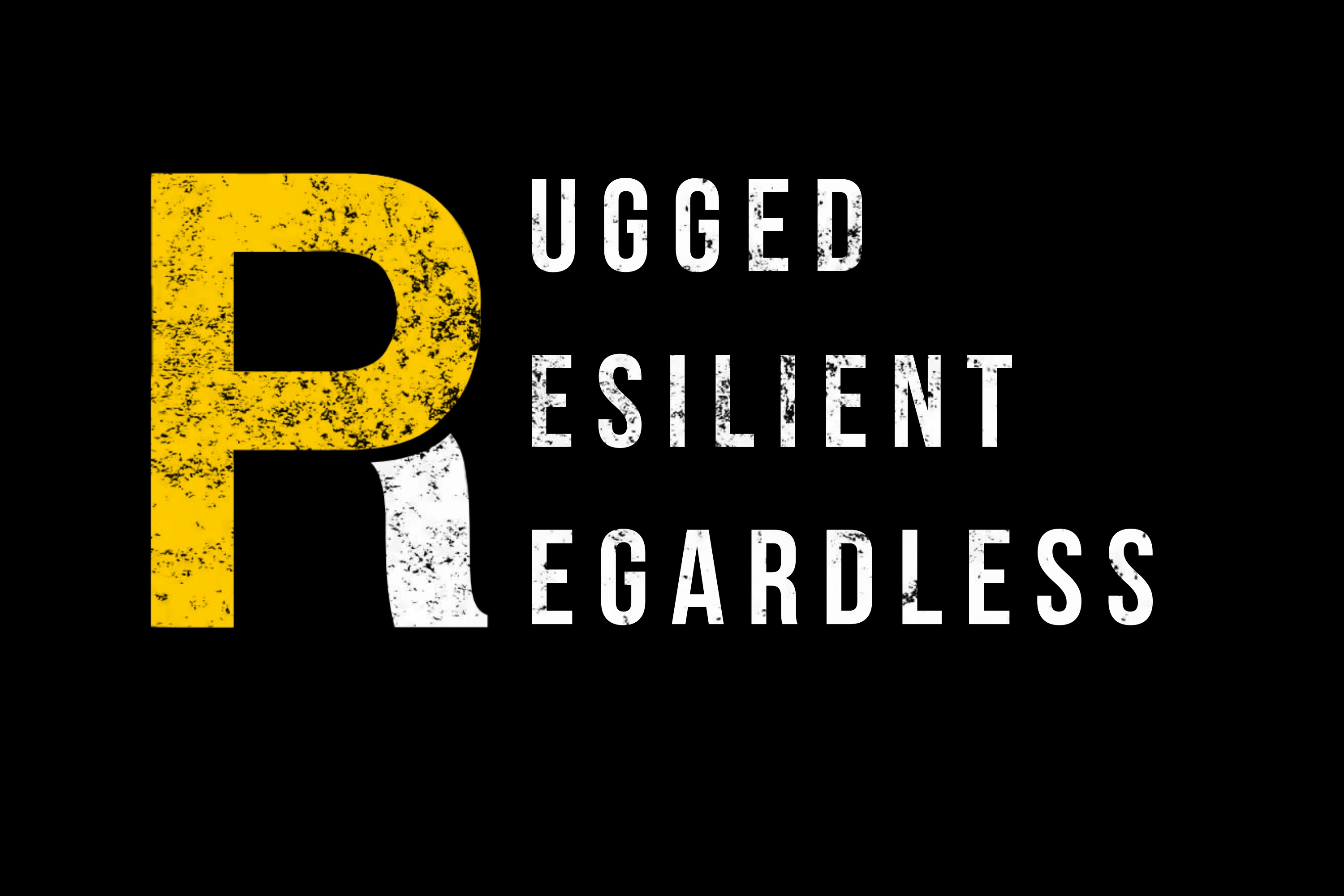 One of the five basic principles of 10/20/Life is Philosophy and Mindset. “Your mentality is a huge part of being successful, and it will determine how far you go. You have to be mentally tough to do anything great. There are lots of things to overcome in powerlifting, and lots of barriers to getting strong – injuries among them. Remember: you will get injured, you’ll face adversity, you’ll have your ass kicked, and you’ll lose badly. How will you respond?” This story is about someone I know that faced extreme adversity, had his body riddled with injuries, and came back to be more of a hero than ever before. My friend Blake DeLoach is a powerlifter that is 100% blind, and his story behind it all is something that needs to be told.

I first met Blake at my gym’s (Boynton Barbell Center) deadlift only meet last summer. I didn’t know it beforehand, but it was only slightly apparent that Blake was blind. I watched him walk up to the deadlift platform, feel out the knurling on his hands, and pull over 450lbs that day. I shook his hand at the end of the day and hoped that I would get to know him better eventually. Since that day, I have had the pleasure of training with Blake on Mondays, and have gotten to know him along with a bit of his story. We connected on the fact that we both have overcome heavy substance abuse and alcoholism issues, mainly through powerlifting and the comradery it gives us. Beyond that, his story holds much more motivational weight than my own, or anyone else that I know.

Blake didn’t do any kind of lifting prior to his military service in the US Army, and only then did some basic lifting. He served our country from 2005 – 2014 and retired out as a Staff Sergeant E6. During his first tour of duty to Baghdad, Iraq in 2007 he was injured while on a dismounted patrol that was hit by an IED. He pushed through for a few months until his shoulder gave out and was sent back to the US. Most guys would call it in from that point, but most guys are not Blake DeLoach. Feeling the urge to get back to serving our country, he re-enlisted in March 2008. The second tour of duty would be to the Kunar Province of Afghanistan from April – October of 2010. On the day that was supposed to be the last mission with his platoon before returning home, Blake’s life changed forever. While on a mounted patrol doing a key leader engagement, his vehicle was ambushed and shot with an RPG that blew up in his face.

The list of injuries sustained would lead you to believe that he didn’t make it out alive. “I lost my vision instantly, shattered my eyesockets, crushed sinus cavity, lost 8 teeth, suffered 1st and 2nd-degree burns, and had part of my skull the size of a dime blown out with shrapnel in my brain. I also had severe trauma in all the major arteries on the right side of my neck. I had a collapsed right lung with shrapnel that shattered parts of my 4th and 5th rib, blowing shrapnel and bone fragments into my right lung. I also had a shattered ring finger, right kneecap, and a broken right hand.” His long and painful recovery from all of these injuries lasted almost an entire year, from October 2010 until August of 2011.

Similar to myself, Blake has had his battles with substance abuse. Using substances and alcohol in excess at a young age, he managed to clean up his act when he joined the service and stopped using for an extended period. After getting blown up by an IED the first time, he began using painkillers again. As usual with addicts like myself and others, once you start that ball rolling again, it is damn near impossible to stop. They become a part of you that you feel you cannot live without, or when you do go without them, you go through physical withdrawals which are enough for anyone to want to keep using them. Understandably, after he got hurt the second time with all of the injuries he incurred, his addiction started to spiral out of control. He would take all of his prescribed painkillers in a matter of a few days, and resort to buying more and more off the street. If the prescription drugs weren’t available, it would resort to buying cocaine and plenty of alcohol. Blake had yet another injury that came after taking a handful of pain pills and alcohol. He fell out of bed while having a seizure and broke his back in 6 places, compression fractures in his T3-T9. Doctors had given him enough prescription drugs to keep him at bay for a few more years after that point until the day he had finally had enough.

The unmanageable lifestyle that comes with substance abuse had finally taken its toll and Blake decided then and there that he had enough. After going through all of the painful withdrawals that come with abruptly stopping the use of opiates and alcohol, a day came where Blake finally felt good enough to get up and begin his new journey. On October 27th, 2016 Blake found Boynton Barbell Center and started Powerlifting. “Being around awesome people and having an amazing gym that I look forward to every day helps keep me clean. It’s an awesome feeling to know that your body is feeling good without alcohol, or narcotics. If it weren’t for my wife Lauren, my friends at Boynton Barbell, and Powerlifting I’m sure I would have relapsed by now.” 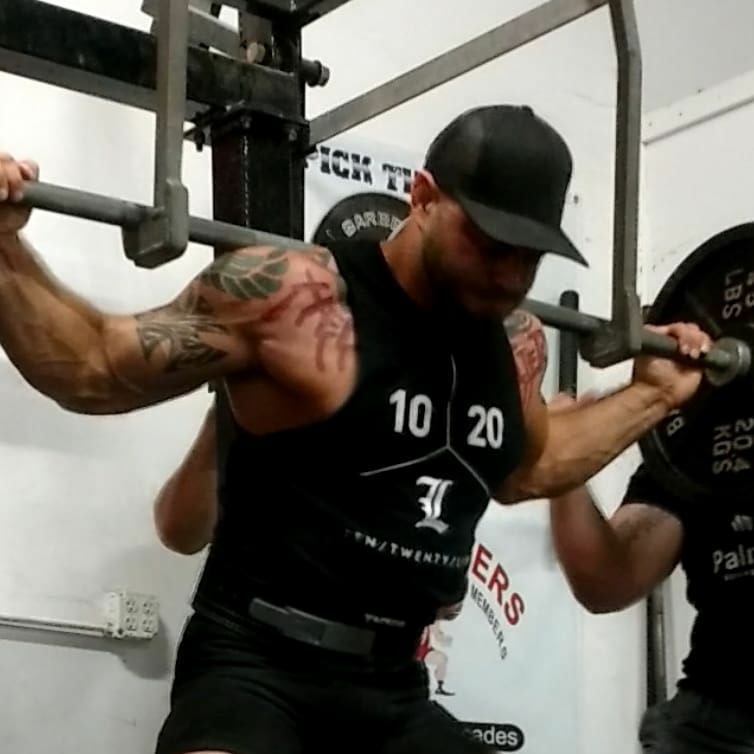 As it says in the 10/20/Life book, “will you lay down, or will you come back fighting?” Well, it’s safe to say he came back fighting and did not shy away from being competitive. Blake has since competed in two full powerlifting meets. There aren’t a lot of things that take my breath away, or get me really emotional at all, but I can definitely say that watching Blake compete in a full APF Powerlifting meet was one of them. Blake has made a lot of progress obviously since his injuries, and even a lot of progress in the short time that I’ve seen him lift. His best lifts so far are a 446 squat, 303 bench, and a 491lb deadlift. I look forward to training around him every Monday. It’s damn near impossible to be lazy, or less than motivated when the guy next to you is having fun, ragging on you, and dealing with everything that Blake has on his plate. I want to thank Blake for his service to our country, and for being an inspiration to myself and hopefully everyone else that gets the opportunity to read this.

What is 10/20/Life? 10-and-20 weeks at a time, for a lifetime of positive momentum in training and in LIFE. This philosophy is a life-long approach for any level of lifter or athlete.  Pick up a copy HERE! 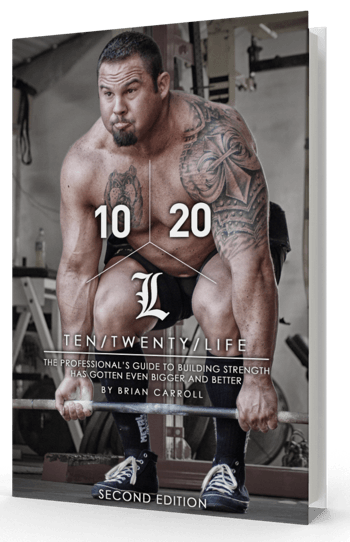