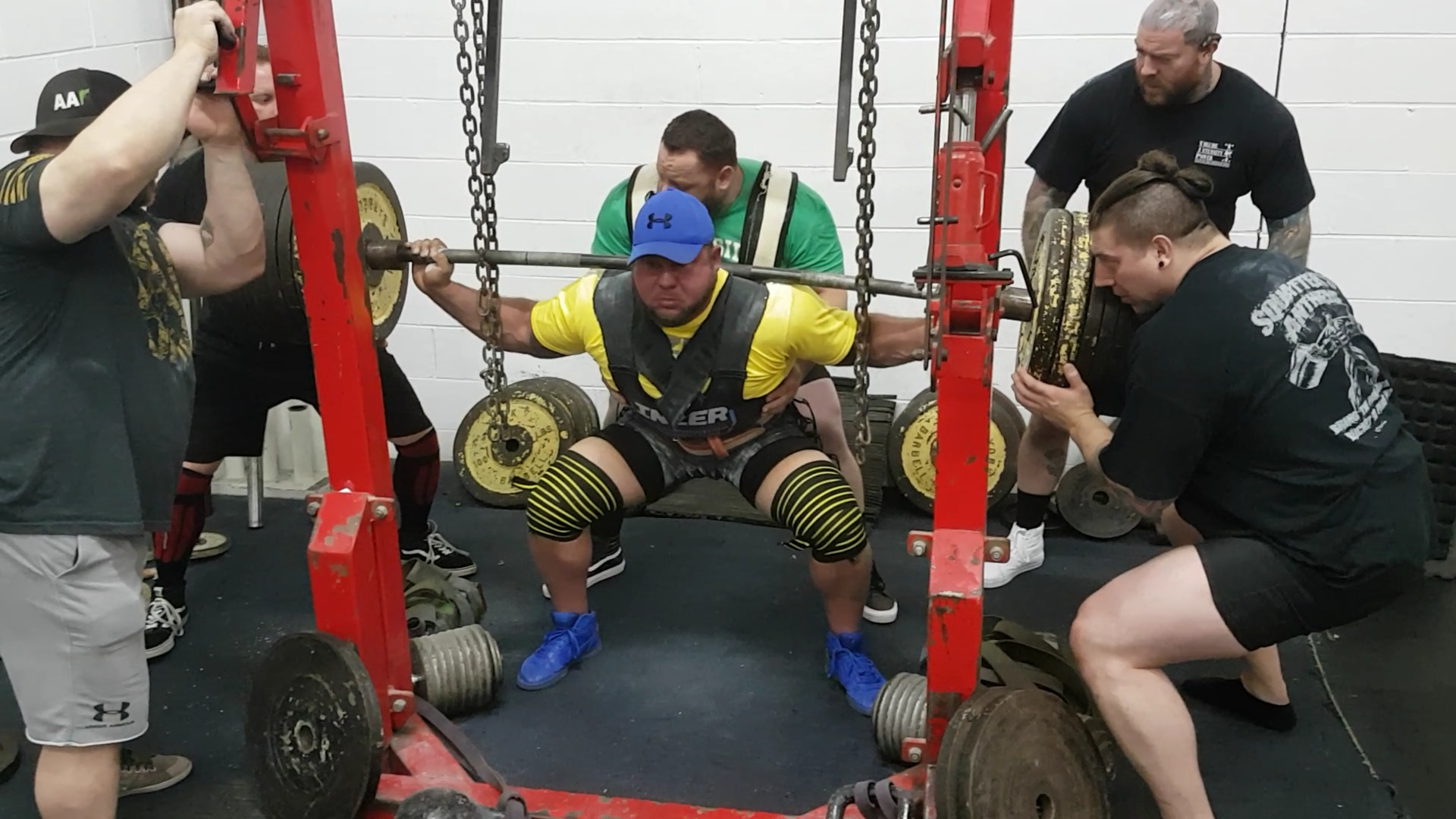 I feel incredibly fortunate to have met and trained with a plethora of amazing people through the sport of powerlifting.   If you surround yourself with amazing people and take advantages of opportunities that become available, you can enjoy an fantastic fulfilled life.  If you treat every day like a “school day” you can continuously learn and evolve through the experience of other peoples experiences, advice, opinions and trials, and errors.

Throughout my lifting years and my tenure with Elitefts and now with PowerRackStrength, I have been exposed to some of the best lifters that have graced this planet and I appreciate and cherish every experience with every person who has helped me with advice, technique, and tips that have helped guide me into the lifter I am today.

A few weeks ago, I was talking with Brian Carroll, and during our discussion, I was telling Brian that I had recently been having issues with motivation and I felt like I was coming to the crossroads of whether to compete anymore.  Over the past three years, I had been having problems with my back when I was lifting heavy, and it came to a point where I dreaded squatting or deadlifting because I knew that I was going to have severe stabbing pains in my back.  I had been living with this for a while, and it was getting to the point where I just felt it wasn’t worth it anymore.  Brian knew I had seen Dr. Stu McGill and was going through a rehab protocol to restore my back and he gave me gave me some savvy advice on how to think about the rehab process.  Brian told me he realized the rehab protocol was a lot of work.  It takes a lot out of you to be disciplined enough to follow through with the rehab, and it was tedious and boring, but necessary.  Brian was right.  I just needed someone to give me a little push to look at my situation from a different angle.  I had slowly started squatting again, and my first session was singles with one 25 lb plate on each side.  I reached out to Brian for advice on how I should approach the transition from rehab protocol back to some real lifting, and he sent me a plan outlining a “baby-step” approach over the next few weeks.

My back was feeling good, and I was slowly testing it a little more each week until I reached 615 lbs for doubles in one session.  No back pain!

A week before the Arnold, Brian contacted me and told me he was traveling to Westside Barbell in Columbus, Ohio to train with Dave Hoff and wanted to know if I was interested in meeting him there for a squat session with him and Hoff.

Are you kidding? Seriously?  Of course!

I had to juggle a few things around my schedule to make it happen, but I made it happen!  Remember, “Take advantages of opportunities that come your way!”

I drove eight hours to Columbus and met Brian and Dave Hoff for dinner.  It’s amazing how much you can learn just from a casual conversation between two of the best lifters on the planet.  Different lifting philosophies, strategies, meet prep regimes, and just listening to the interaction between Brian and Hoff was worth the trip (even if I never had the chance to lift). 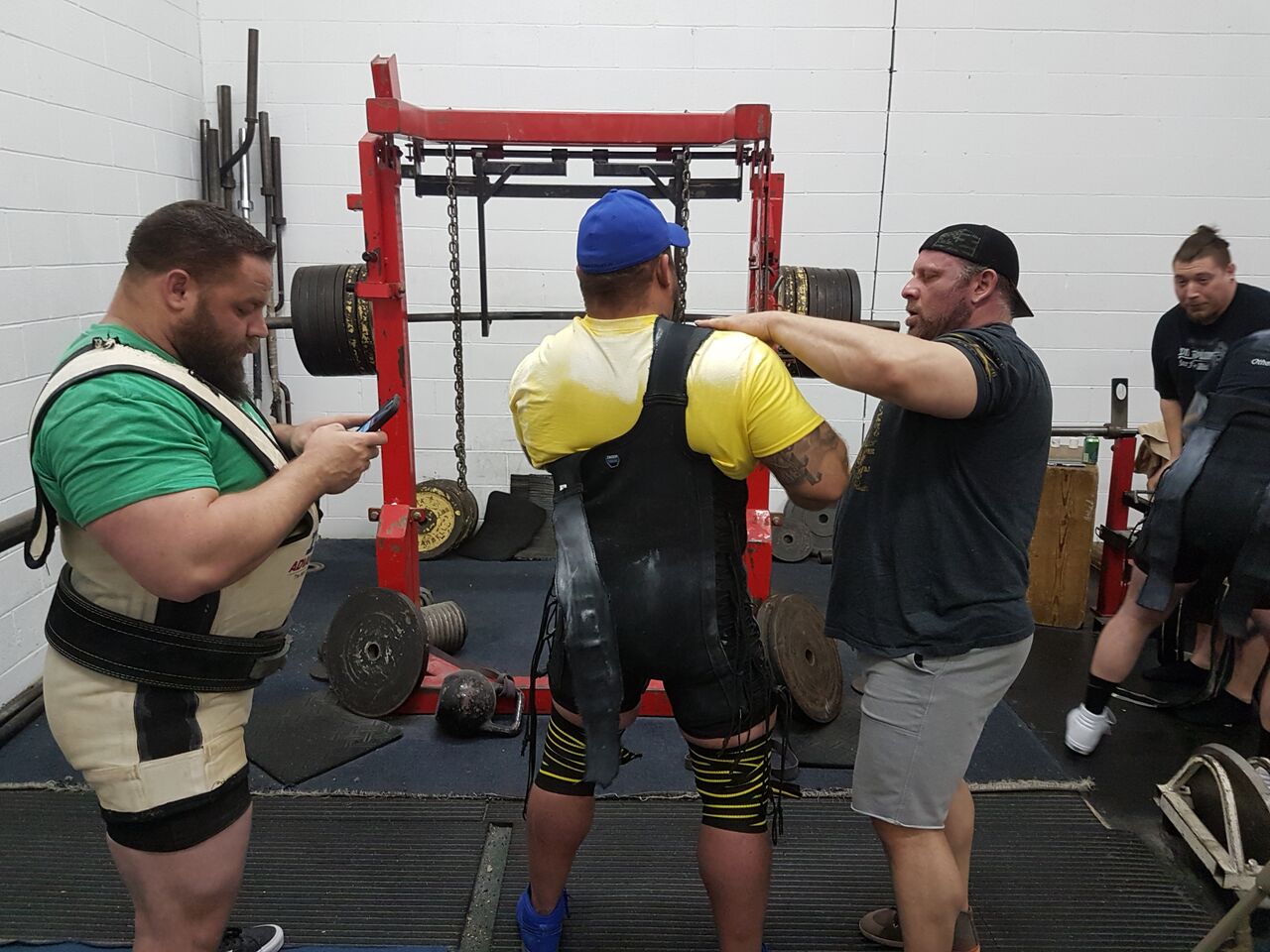 Brian had a couple of commitments while he was in town, so I took the opportunity to make the rounds with some of the people in my powerlifting circle.  I went to Elitefts to check out the new S5 compound and visit Dave and Traci Tate.  The new S5 compound is a fantastic facility and again, one of the coolest gyms I’ve had the pleasure of visiting.  Next stop was to visit JL Holdsworth at his new Spot Athletics location in Dublin, Ohio.  Another fantastic top notch 20,000 sq ft training facility that was impeccable.  It’s always great to see JL, who seems to have an endless supply of energy and motivation.

Next stop – Westside Barbell.  I had a great conversation with Tom Barry who runs the business side of Westside, and we spoke about a cool project that Tom has been working on for Emergency Responders.  I was also able to track down Louie Simmons who was training by himself in the gym.  I always love talking with Louie, and he still is more than willing to offer advice on anything to do with lifting.  A true legend!

I would be underestimating my excitement if I said I wasn’t blown away at the opportunity to train with Brian and Dave Hoff.  I hadn’t been in a suit for months, and I was still in the process of testing my back even though I got the “green light” from Stu McGill that I could start training as I felt I should.

There was two-night crews training, and we had about ten people squatting with our group.  Warm-ups went well, and I went up to 645lbs in briefs.  Brian gave me a couple of great tips on how to engage my glutes during the decent which made a big difference in keeping great tension in my lower body.  I went 755lbs with suit bottoms and took 825lbs with the straps up.  Everything felt great, and I didn’t have any back pain whatsoever!  Watching Brian and Hoff squat together was a fantastic experience I will never forget.

The entire crew went out for dinner afterward, and Brian and I went back to his room to do a short video interview.  Our evening wrapped up at about 1:00 am, and Brian had to be at the airport to catch his plane in a couple of hours.  I got about 4 hours sleep and headed back to Canada with my brain swimming with a million thoughts about the amazing experience I just had. 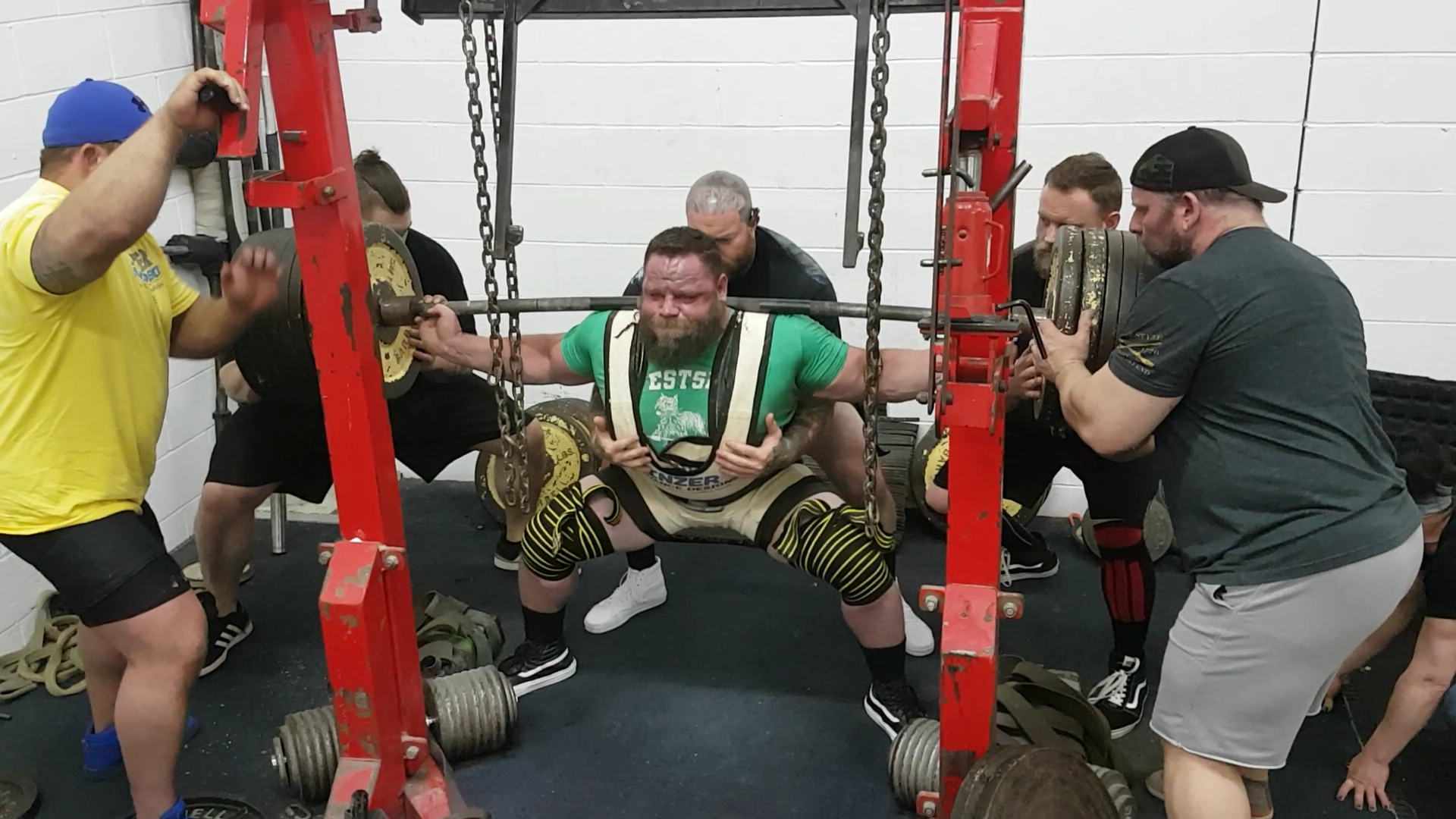 Brian and I had a very cool conversation about why things seem to happen for a reason.  We discussed Brian’s injury, his experience, and relationship with Stu McGill and how that all came together and ended in a collaboration that published a fantastic book, “The Gift Of Injury.”  My similar back issues and relationship with Stu and how the universe seems to make things happen that look like it’s more than mere coincidence.  The fact that I was at a point where I thought I was nearly finished with competing and the timing of Brian calling me up to go to train at Westside with him and Dave Hoff.  Sometimes things seem to come together just when you never expect it.  After that weekend I was re-energized and ready to push forward to complete my original goal of squatting 1000 lbs in competition, which would be a monumental achievement for me at age 53.

I also learned that I’m the same age as Brian’s Dad, which made me reflect a little on how old I’m getting, but if Brian doesn’t mind hanging out once in a while with an old dude, I’m fine with that!

Surround yourself with amazing people and take advantages of opportunities that are presented to you and you can live an amazing, fulfilled life.  That weekend was an extraordinary experience for me; I sincerely appreciate it and feel incredibly fortunate and blessed.

Ken is a full-time Firefighter and Rescue Technician with the Oshawa Fire Department and is a certified Kettlebell Coach and WKC Master Trainer. Ken competed in Kettlebell Sport and won several championships across North America. In 2012, Ken competed in the Firefighter Combat Challenge where he won the Canadian National Championship. Ken trains at his home “Outlaw Powerlifting” gym outside Toronto, Ontario with a team of lifters that train and compete together. Ken is an Elite powerlifter in the 275 and 308 lb weight class and his current best lifts are 940/550/705 and his current goal is to squat 1000 lbs to become one of the few lifters to achieve that goal in their early 50’s.