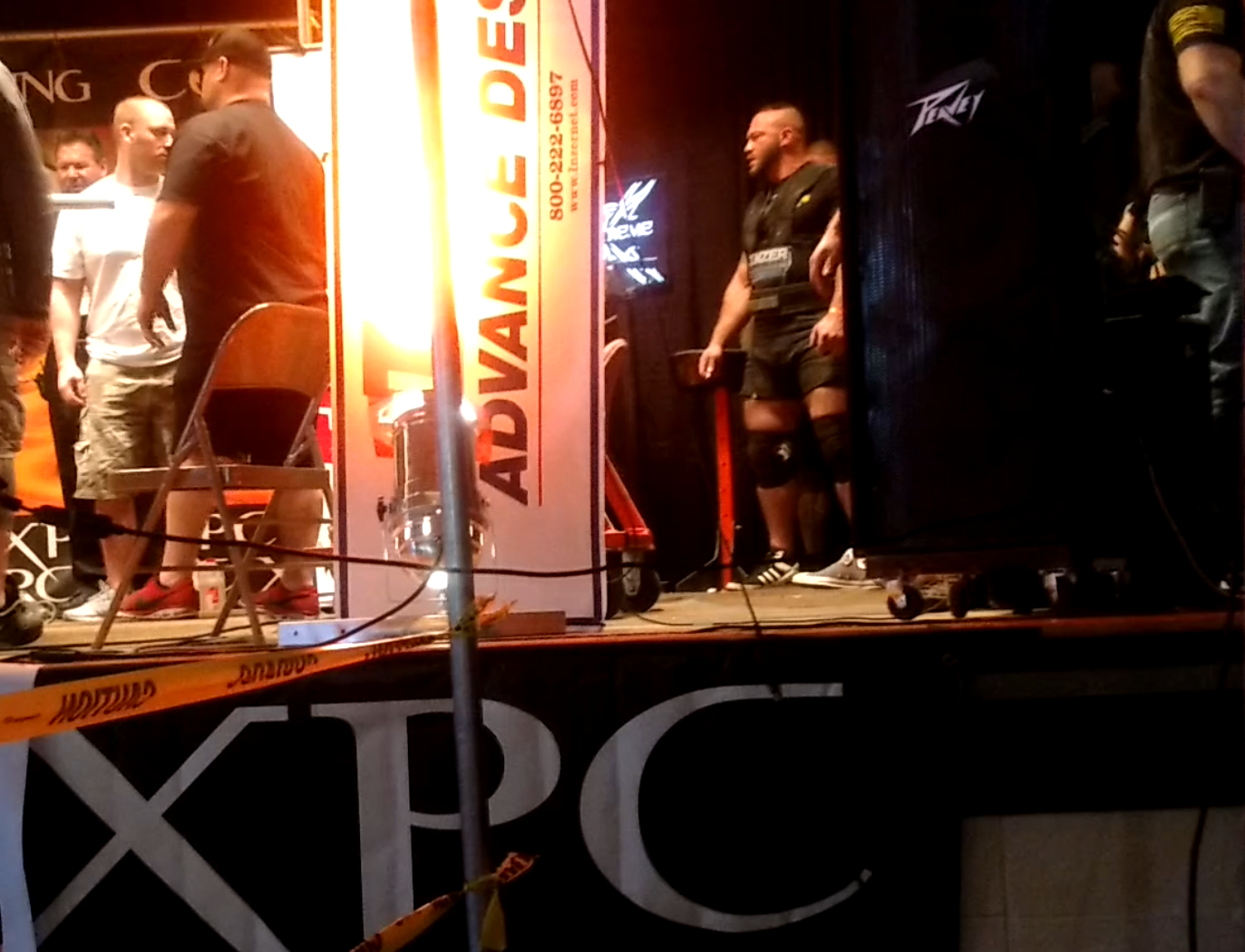 Time flew by the last few weeks, the meet came and went. I’ve had a few days to reflect on it, so here’s what happened, and here’s what I learned.

The wife and I traveled down to Columbus on Wed night so we could get settled into the hotel, and I could get things lined up for my cut to 198. I was a bit unsure of how exactly to approach the 3pm weigh in time as it related to the cut timeline. Luckily Brian Carroll was good enough to help me out a bit on the timing and suggestions on what to do differently than the usual 9am weigh in. I started cutting Thursday afternoon, everything went very smoothly although different than usual, and I weighed in at 197.6 with no problems on Fri. My weight went back on smoothly as well. I trained around 218 lbs, and was easily back to that weight or more before bed Fri night.

Saturday I got to the meet site around 2pm, got settled in, found where I was in the flight, and relaxed until it was time to start warming up. I had a great support system in Dan Dalenberg who had just won his weightclass and best lightweight lifter in the a.m. session, Dain Soppelsa, the rest of their team, and my handlers/training partners; Jake Zainea, Mac Hinders, and my wife. I couldn’t have asked for more, they all made sure I had everything I wanted all day.

Squat warm ups went well, I hit my normal general warm up, then made plate jumps up to 600 lbs. before taking the stage for my 650 opener. Here’s video of my squats:

650 opener was weak out of the hole, but snapped up after that.

A little trouble out of the rack, and out of the hole again, but not bad overall.

So, I came out of squat feeling good, the 700 was a milestone I’ve been wanting to hit, and it put me in a good lead over the other 198’s. I got a little food, rested, and waited for bench to start. When it rolled around I did some general warm up, then hit 50 lb jumps up to 335. Here’s how attempts went, and unfortunately where things started going downhill…

If you watch my right foot, you’ll see exactly what happened here. I made sure to spray with stick um on the following attempts.

Took the handoff all kinds of wrong, had to re-rack, then took the bar way too low and dumped into my belly. What a huge letdown, to come out of bench with a measly 360 because I made stupid, rookie mistakes. I hated the bench as well, it felt awful, but that was no excuse for what I messed up here. After eating a little more, clearing my head, and focusing on what I needed to break the 1800 barrier, I felt confident and was chomping at the bit to get deadlifting. Then, shortly before we started I crashed, I pounded a monster to get myself back up, but the caffeine made me start pissing like crazy and my legs began cramping violently. I ate salt, mustard, and pounded gatorade with added electrolytes, but the damage was already done. My legs felt like they had been beaten with a bat and weak. I dropped my opener by 50 lbs to 600.

This was awful, painful and hard. I tried going to my original opener of 650 on my 2nd attempt, but my legs were shot. So I ended with 1660@198, which was good enough for 1st place at 198, but a huge letdown. If you followed my training going in, you know 1800 was a conservative goal, so this really blows, but it happens.

What I learned: Afternoon meets are rough, I started squatting around 4pm or so, and didn’t finish pulling til 10:30pm or later. This takes some serious accounting for, and a 10% weight cut is not prime when dealing with this. I don’t know that I’ll ever do that again for an afternoon session. I need to do better about planning everything, its weird but I’m so used to morning meets that I forgot a lot of basic things preparing for this afternoon session. Simple things like a roller or tiger tail, extra t shirts, anti inflammatories, etc. Having everything planned and written down could have helped me to avoid this. I probably should have adjusted my sleep schedule and taken a couple vacation days from work also. I worked extremely hard, long hours going in thinking it wouldn’t effect me because its pretty normal for me, but it was a mistake IMO. So, no excuses, just a learning experience to grow from.

I want to thank my beautiful wife for everything she does for me, from meal prep, to being a great training partner, driver, handler, etc. She rocks and I couldn’t do any of this without her. Brian Carroll for all the help he has given me over the years to make me the lifter I am today. Inzer Advance Designs for making the best equipment in the biz. I wouldn’t have squatted that 700 without the black beauty wraps. Dan Dalenberg for his coaching and handling at the meet, Dan is a real professional and shows it both on and off the platform. Mac Hinders and Jake Zainea for being great friends and handlers. Mac puts a kneewrap on that will get anyone a PR, I’d put money on that. To everyone else that helped, cheered me on, and so forth, I really appreciate you all. I’ll make sure to redeem myself sometime in the coming months. For now I’ll take the win in my weight class and move on.