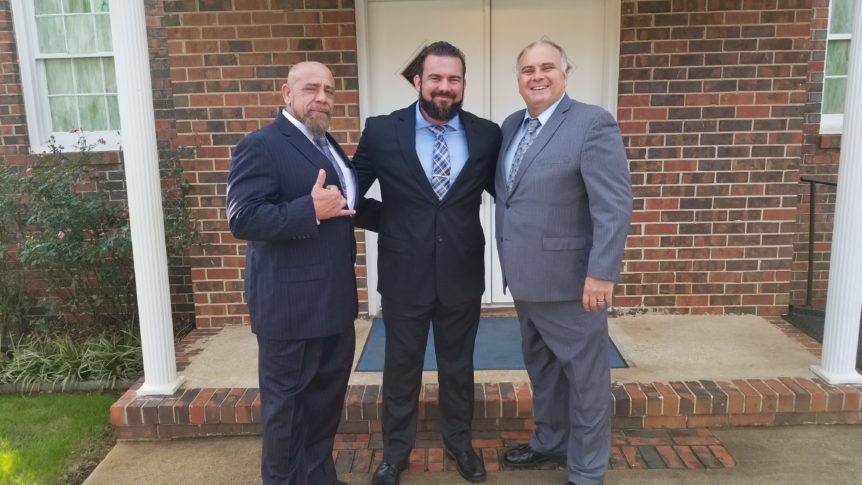 Numerous things have happened since my last training log entry.  To all followers, my apologies for not keeping things consistent.  Unfortunate circumstances brought me to Greenville, SC for the week prior to Christmas.  After spending a week with family I departed Friday to ensure I’d be able to squat / pull with the team Saturday morning.

Knowing the competition was the same weekend as the Daytona 500 I wasn’t looking forward to the traffic and hotel booking issues that come with the race however easily overlooked.  To add some complexity to the situation during the holiday weeks I was battling knee pain post belt squatting and didn’t think much of it.  Fast forward to Saturday the 30th.. normal warm up procedures were followed then I worked up to an easy 425 in sleeves.  Threw a light wrap on for 515 then started top sets with 545.  The first single moved with ease, after some time I wrapped for another single, sat back into the wraps and upon turning the squat around was greeted with a sharp pain, no drive and had the team handle the weight for me.

I have no idea what happened nor did I bother visiting a doctor.  The first thought that came to mind was pulling out of the meet but jumping to conclusions isn’t my thing.  The waters were tested Wednesday with bodyweight squats, followed by goblets then an empty bar; everything felt solid.

At this point I was strongly leaning toward pulling out of the meet.  Not just from a physical standpoint but mental as well.  All work prescribed for the competition prep was done however I wasn’t 100% committed up stairs.  To be honest I didn’t feel I’d be in a position to have a good shot at the desired total.  The plan for today was to deload and contine to evaluate my knee.  As most of you know things never go according to plan as things shut down at 425lbs for three singles (no wraps).  Absolutely no pain which was great therefore I transitioned to deadlifts and executed a similar plan.

As Saturday strayed from the competition prep outline the necessary adjustments were applied to Monday’s training.  I ended up shutting things down at 325 for a few doubles followed by close grip work.  Fairly lack luster training day as my head wasn’t in the game knowing I was committed to pulling out of the meet at this point, just thankful it was by choice and not forced.