Step one for training toward lifting at the Arnold in 2017 is now complete. I am still relatively healthy after this meet and came away with a PR total and a squat PR as well. I did not end up making the weight that I wanted to get to so I weighed in at 205 instead of 198 after starting to reconstitute my weight a few hours earlier when I was a few pounds lighter.

After weighing in I stopped at the Waffle House that was on the way back to my house and chowed down a little bit. I had my water, Gatorade and super sugary drink all on hand sitting in the Waffle House which got a couple glances but that is par for the course. I got back to my house and began pounding down super salty nachos and salsa and getting all my fluids in. That, along with several other meals which my wife Emily so kindly helps force-feed me (like a good wifey does) I was able to get my body weight back up above 220 comfortably.

The next day at the meet it felt like I was at a family reunion with some of my favorite training partners I’ve ever had coming from North Carolina to help one of their lifters. They also helped me out substantially through the day along with my training partner Charlie and my wife of course. She was running everything in full out authoritarian mode and I loved it. There is no possible way I could not be prepared for any circumstance with that woman around. I am extremely grateful for that, I married the greatest training partner I could have. I was in the third flight of squats which meant I got to sit around and hang out with all these great friends that I rarely get to see. I was fortunate not to already have sore abs before I got the start warming up from all the laughter.

I started warming up with my normal bird dogs and other McGill warm-ups along with my specific stretches I need to get the positions that I do in my squat technique. 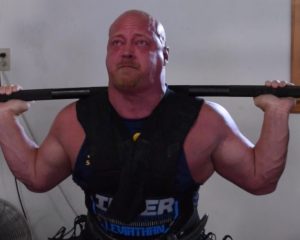 Inzer Leviathan Ultra Pro on straps up
625×1
Inzer Gripper Wraps on (Full armor)
750×1
we had a small miscommunication for my last warm-up thinking I would build to take it on the platform before my flight started but when I sat down I began watching my flight start so this was apparently not the case and we all had to rush back to the back and quickly load 850 onto a different bar so I could take my last warm-up. This made me a little nervous but it all went extremely smoothly and felt perfect.

Opener: 950 3 white lights
This moved super fast and I felt like I was in for a good day after this rep.

Second attempt: 1040 3 white lights
I was surprised at how light this felt on my back compared to other times I have attempted four digit squats. It is in this weight range that even the 65 pound squat bars begin whipping a bit as I take up very little space in the bar’s center and those bars are also long. This was compounded by the wider hundred and 45 pound plates on the bar which increase the whip effect.

Third attempt: 1105 three red lights and a terrific catch from the spotters.
I came to this meet intending to attempt a world record and I felt good. I went for the 220 record since I had the squat that I needed to build a good total with. I have unracked over 1100 a couple times in my life and this was by far the best it has ever felt. The bar whip was worse on this rep of course and eventually was enough to throw me off in the very bottom just before I hit depth. My back rounded and I shook it off which was followed by a perfect catch from the spotters at the meat. I couldn’t have asked to be any safer than I was at this meet.

After squats were concluded I get to sit around and be the most nervous that I am at a meat. My nemesis, bench press is up next…..

Bench press warm-ups are always very easy for me since I don’t have very high to warm up to. 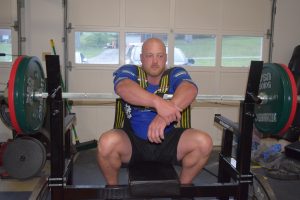 Second Attempt: 550 3 white lights
This is a standard bench for me in a meet and I could tell from the way my right shoulder felt that it was completely shot and fatigued. I have loose ligaments in my right elbow which causes my arm to shake from instability and my right shoulder fatigues much quicker than my left because of it. I sat down and thought about it for a little while to make sure I didn’t make a rushed decision but I decided to pass on my third attempt and save energy for deadlifts to make the total I wanted to.

I felt good in general after bench press which is certainly a rarity for me. I was excited to get my opening deadlift in and officially make a total. It was going to be a PR on my opener.

Opener 650 3 whites
I got really lazy on my set up which I normally do on my opener and it was little wobbly on balance. The weight felt light in my hands so I knew I was fine..

Second attempt: 710 3 whites
After some quick math we realized that this number would give me a 2300 total which sounded pretty cool so we called the number. This lift was a much better lift and actually easier than my opener.

Third Attempt: 750
This is a number I’ve wanted for a few years so I decided to give it a go. It actually flew off the floor but I tore a callous just before lockout which was enough to miss the lift. This number is certainly there but not on this day. I didn’t actually notice that I had torn the callous until I went to shake someone’s hand and saw blood running out of my palm all willy nilly.

Overall, I am very happy with the way the day turned out and it has set me up to qualify for the meets next year that I want to lift at. Hopefully all goes well and that will happen! It was a 120 pound total PR with a solid squat PR as well. After a couple weeks of relaxing and getting caught back up with work and school I will start training for a weightlifting meet coming up very soon and then focus on powerlifting going in the next year. I certainly have to thank my wonderful wife Emily for always being there in a plethora of different ways that always help me out tremendously. My regular training partners Charlie and Noah were a huge help through the training cycle and Cameron, Matt and Kyle coming in to help spot when my squat sessions get stupid heavy and I begin fearing for my spotters more and more. Now it’s time to back off, regroup, recover, plan and work toward next year!