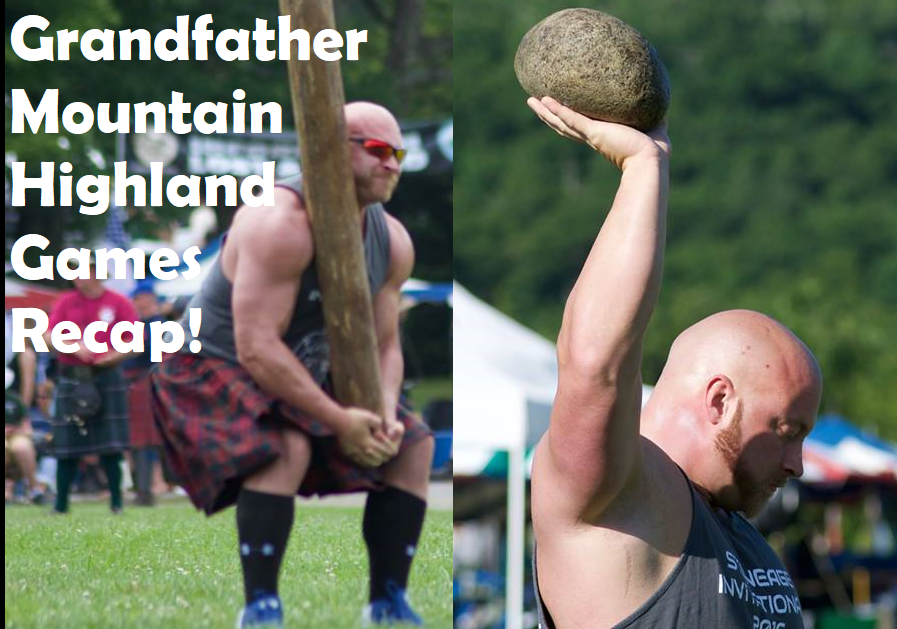 Since the priority is much higher for powerlifting in Highland games right now, the week of the games was actually my heaviest week of fives. That training was in the training log last week and you can see how heavy I want setting several personal records but also accumulating a lot of fatigue. Since I only games are much more about going out and having fun with good friends in the spirit of the games I knew my performance was going to be down but it would be worth it. It is also near Boone North Carolina which my wife and I hail from so we get to see family on that trip as well. Too much fun to turn down! 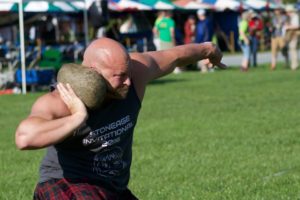 The day started off as usual with a stone put the event but this stone was a bit of an odd one. Instead of an open Stone which is between 16 and 18 pounds or a Braemar stone that is between 22 and 28 pounds with a different set of rules, we had a 21 pound stone that we through as an open stone. All this means is that we can move our feet for the throw instead of having to keep our feet set like on the braemar event. My best throw was a bit over 31 feet which was a little disappointing since after the same distance with a stone a few pounds heavier two weeks beforehand. 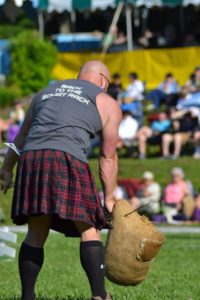 Next up we departed from traditional order and went to the sheaf toss. This event is where we throw a 16 or 20 pound bag in this case with a three-time pitchfork over a bar for height. This is my favorite event in the games but it was pretty frustrating on this day. I could feel my back fatiguing quickly from the heavy lifts the previous week and after reviewing the video I could tell my timing was really off. I managed a throw it 24 feet and missed at 26. I was hitting the bar at 28 feet two weeks previous so it was just an off day. 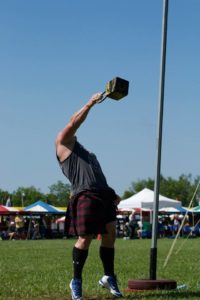 Weight over bar was the next event which is also not very good for me with several missives from technical issues at 11, 12 and 13 feet but I managed to make it to 14 feet and hit the bar on every attempt. 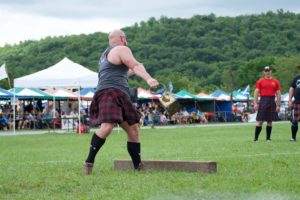 We moved onto heavyweight for distance after this which I through a mediocre 27’10”with a single turn. I have thrown almost 3 feet farther than this in the past and I’m honestly just out of practice with the weights. It also showed on the light week for instance which I threw for only 54 feet. Certainly frustrating but not unexpected. 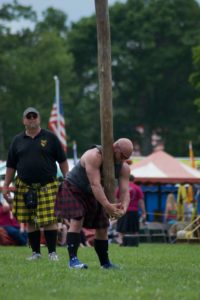 After this we want to caber toss where we are throwing a tapered log with the goal of flipping it completely straight at 12 o’clock (180 degrees). This was a calamity of errors for me and likely the most frustrating event for the day. The caber we were using shouldn’t have been very challenging for me but I had gripping problems on the first two events where I couldn’t get a hold of the caber very well due to either having too much tacky on my hands or too little.  The third attempt started off as it should with an easy pick and I was able to get a good run with it before stopping to pull but as I approached the “drop and pop” where we stop as quickly as it can drop the hips and pull to turn the caber the wind seemed to catch the top of the caber and turn it sideways as I went down to pull. I ended up pulling the caber sideways and at that point I was so frustrated with it I didn’t bother to check what the score was. 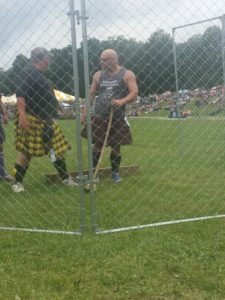 Our final event was the hammer throw and this started to go relatively well for me. I was throwing within inches of my best throw ever! I finished with a 77 foot and change throw on my second throw as I managed to foul what felt like a great throw on my third by my heel sliding in front of the trig by the smallest of margins disqualifying my throw. I was very disappointed and frustrated by something like that being called on the only event that went even close to well on the day. However, I know the stress of being a judge and I accepted the call.

As always I enjoyed being able to throw with a great group of people. That is certainly the best aspect of the games! It was just a predictably bad performance that was still worth coming out for even if it was a little embarrassing.

Just one of those days!