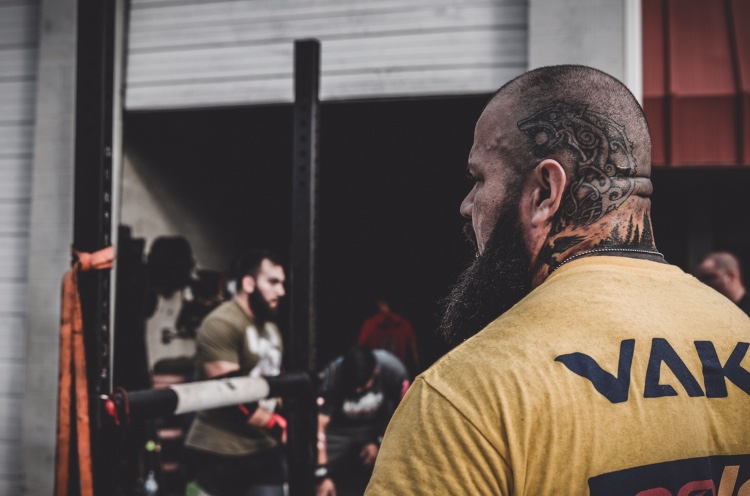 Next weekend on the first of December I will be fighting for the Strongman state championship. It will be my first competition in 2 years and to say that I am a mixture of emotions is a massive understatement. The road hasn’t been easy, in fact, its been personally very hard. There were many times on this road I almost hung up the gloves and walked away. There were nights where I would just stare at the ceiling fan, lost in its quiet hum, letting my heart stay inches about the waters of doubt that drowned me. I was trapped in a glass box, watching the world I loved so much all around me continue on as I felt my body break apart and my hope drift away. Every day of doubt only filled that box up more and more. Some days I scratched and clawed at that box hoping for a hole to break through to get a glimpse of my former self.. just a fucking hint of him.

Along this road I suffered a shattering personal loss and a second injury that would sideline me once again. Just when I began to feel my feet underneath me again, life would challenge me beyond what I thought I was capable of. We all have tough stories and mine is no different. As I write this to you from the comfort of a bougie Starbucks and sip my iced medium Americano (I refuse to say grande) I am filled with perspective. It is easy for me to go on and on about the hardships, challenges and gut wrenching losses I have felt along the way but instead I will focus on what kept me alive and falling forward…

Axegiving signifies a day for my gym lifters to gather together on Thanksgiving morning in a potluck of both food and lifts. Lifters, family members and friends come to try out new implements, set PR’s and enjoy drink and food beyond what our stomachs can hold. This is the only day I take off restrictions and let lifters go after any attempt their little hearts desire. Similar to many of our Saturdays, it is a dance of controlled chaos with folks moving to and fro lifting, clapping, cheering and grunting their way into the morning hoping to earn the calories they are about to ingest. Despite some of us using this day as our final training day for Florida’s Strongest Man, the passion and focus in at The Axe was palpable. From young to seasoned athlete, every single person adopted their role as plate loader, passionate cheerer, lifter, and voice of reason. It was at the end of my training day and after an amazing group picture that my day and life would absolutely solidify itself… 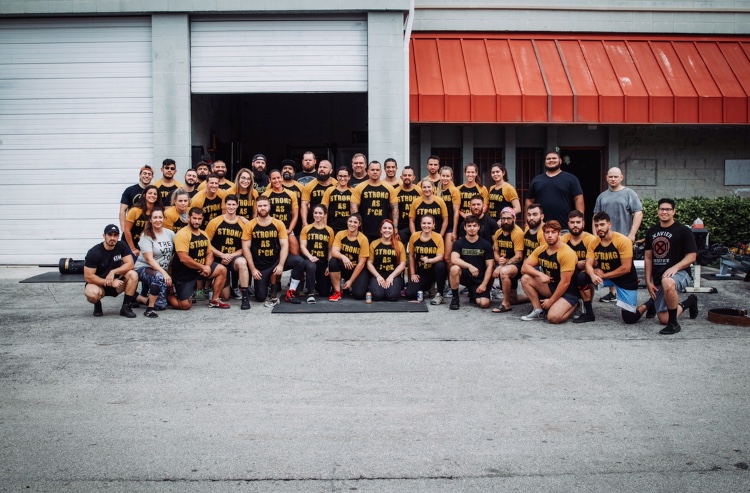 Under the cunning leadership of my GF Megan , The Battle Axe Clan were able to purchase a secret order of shirts supporting my “comeback” into the sport.  As I watched the box open up for what seemed like an eternity, my clan stood their silently as these shirts were shown to me. Their support, belief and encouragement absolutely drove a dagger into my soul. I am not one for surprises. I am not one to easily accept gifts and I am that guy who sends you out of the room while he reads birthday cards. I absolutely am a terrible gift receiver and today was no different. I grumped, cursed and foot stomped to cover up the overwhelming feeling of emotions. It was a flood of so many.. many… days of fucking doubt. So many days of having lost my way and rebuilding. And here I was, standing amongst my clan and peers utterly shaken to the bone by this act of kindness. I stood there an emotional child, a hardened man and an appreciative leader all at once. There, at that very second, I felt it…

I didn’t feel the doubt and sadness of the previous years, instead, I felt the elation of staying true to The Way. To be respected as someone who never gave up and never caved on the good fight of charging forward for a dream. This was life after competition. This must of been what generals, kings and revolutionists felt carrying their flag to the front lines, even if but a fraction of that emotion, this must be what it fucking felt like. It’s not what I accomplish next week, instead, it is what I have become along the way with the help of so many incredible people pushing me to keep raging on. This is what it feels like to have your face covered in muck, mire and blood with your sword dulled by years of battle with an insurmountable horde of enemies on the horizon. I was Michael De La Pava’s inner Robert The Bruce and I felt Alive. There, in the trenches once again leading from the front but this time with a clans unmeasurable loyalty, the fierce passion of loved ones behind me, and enough battle scars to crush the average man. It didn’t look like rain that day but then again, it didn’t need to. That day was my day….it was our day.

I started this piece with the bitter taste of the ongoing hardships to reflect the gratefulness that I feel at this moment. I don’t step on the competitive field without the assurance that I showed up to fight for first place. The nerves are only compounded by this desire and expectations of myself can be crushing but not this time… I am man hardened by life experiences and utterly honored with the belief of those I hold closest to me. No, I don’t show up to just have a good time and neglect the fact that I want to win, I cant deny that I am extremely competitive but times have changed. When my day comes my banner, my accomplishments, and my legacy will not be made  solely of my victories but rather, forged by the times that life knocked me down and I was able to stand on the shoulders of those around me.

Next weekend on the first of December I will be fighting for the Strongman state championship. It will be my first competition in 2 years and to say that I am a mixture of emotions is a massive understatement. Sound familiar ? It should because the feelings remain the same. The playlist in my life remains the same because my goals are the same. Next weekend is one of a few steps I have to take to fight for what I want in this sport and I will show up with the fervor I have never felt before. It is not that I am fighting to be who I was, its not, because I killed that man long ago. Instead, I will stand for something greater than myself and that makes a very dangerous warrior. I’ll end this piece with a poem that has been close to my heart for many years and sometimes other people have just said what you feel so perfectly you can’t help but use it. Like that perfect song that comes up on the radio, it always feels like they wrote it just for you doesn’t it?  Don’t give up and don’t give in, the world is a better place when character and spirit are forged through hardships and battle…

“The woods are lovely, dark and deep,

But I have promises to keep,

And miles to go before I sleep,

And miles to go before I sleep”