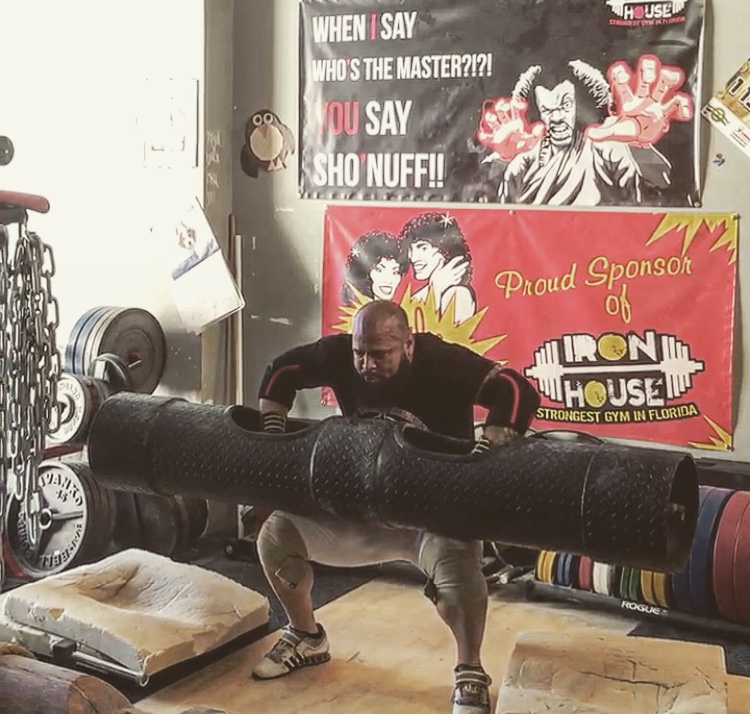 IronHouse gym FL, what we all in Florida call the Mecca of Strongman. We affectionately name it this not only because of how many of us make the pilgrimage to train there but also because Alan, the owner, puts in a huge effort to keep it stocked with all the Strongman implements you will need. Me and some of my lifters made the 4 hour journey to get one last shot at the exact implements that will be used in States. I am a big believer that strong is strong and  training with the exact implement isn’t always necessary but when readily available it is always important to exploit this advantage. After 2 years, 3 months, 6 days and 4 hours I stepped back into those doors not as a guest or preparing to MC but as a lifter, a competitor and an old war hound. I know a lot of my stories drip with nostalgia and aged emotions but that is exactly the feelings that burns within when you step back into something you love but never truly left.

The doors opened and the small gym that holds every toy ever needed with the most amazing collection of banners I’ve ever seen, felt just like home again. I stepped into a pair of old shoes, slipped into that worn in leather jacket in the back of your closet, I was MDLP eating moms cooking… I felt back. As the lifters starting to walk in I could not help but smile and think back to years ago when there were a few of us that were fighting for our lives at nationals but here we were… a little older, a lot more beat up but still in the game. As more and more war Stories were told, bands were swinging around warming up joints, and pre workout filling the guts, this room became electric. We had each had our own goals and as competitive as the feeling in the air was, it was thick with camaraderie.

Don’t get me wrong, I came here to win and the day of competition maybe we cant be the best of friends but I NEVER wish my opponent a bad day, a hard life, or injury. The only way to win is against them on their best day and sharing a training day should be no different. From the old generation to the new, the goal is to provide a flame, a beacon and guidance. Whether thats sparking a competitive fire in them by talking shit or helping them learn seasoned tricks on a new implement. That is the history of this sport and the culture that keeps us in it, despite breaking down our bodies at an alarming rate. Are you doing this for your sport? Write that down, give it a thought and get back to me

The goal of the day was to hit possible opening and second attempt on the bigg dogg log with much better technique and test my joints. Log went accordingly to plan and felt smoother than any previous training session despite all the weeks and hours on the road. The heavy yoke was just that… heavy ass yoke. 780 pounds didn’t really move like it used to but I was able to carry it with no drops. Speed is not the name of the game for me during this comp as 4 months back in strongman has only proven to me how far I have left to go (I LOVE that feeling). What I lack in fitness I hope to have a good opportunity to showcase that old war hounds don’t get their scars for free and experience will fill in the gaps that time has taken from me. The wheel barrel remains a bastard implement that I hate haha! Regardless I was able to train with her and stopped after a small tweak in my bicep. The strain was not severe and it allowed me to sit back and watch my Battle Axe Clan lifters do great work.

As I sat there on that cool Orlando morning licking my wounds and observing proudly, I came to the conclusion that this was a huge part of my life. I had missed this feeling. The feeling of talking shit, coaching, queuing, getting beat up and catching a heavy meal after events. Yes I have been training but being “one of the guys” has been years in the making. I know it sounds silly and maybe to some of you it brought out a big chuckle against the old rhino, but I think you get what I am putting down. With confidence in the air, shit talking pre lift and smile post lifts… it felt good to BE BACK. This isn’t a weekend hobby for me, it isn’t a passing fad and I never…NEVER let life miseries and obstacles keep me away from the sport. It’ saved my life as much as it has taken many things from me and I would be lying if I didn’t write that with some sort of twisted pride. I am not too proud to admit that  I am chasing legacy, fierce battles and in some ways, fame in my world and it all starts sitting on that strength world dug out .. covered in chalk, blood and torn calluses smiling your ass off knowing this is where you belong. So I’ll leave you with a little line that The Babe told a young Benny The jet…

And the heart beat goes boom….boom…boom..boom..