I worked a half day today and didn’t eat a whole lot, shake for breakfast, some turkey for lunch, and another shake before we hit the road and a gallon of water down the hatch before 4:00. My weight this week, with very little carbs, was sitting around 201. I water loaded a little bit which put it up more than normal. That was ok though, nothing to worry about. Got to Columbus early enough to go shopping to waste some time and then hit the sack. Rachel travelled with me so that always makes the drive go by faster.

Weigh-ins actually started at 8:00, but I wasn’t in too much of a hurry. I jumped on the scale before I left and I was 197 so there shouldn’t have been a problem. We got there about 9:00 and to my surprise, the scale was higher than mine. By about a pound and a half others were saying. Luckily I was 198 on the nose; seems I like cutting it really close always. Time to eat and refuel, not as necessary to stay on it like the usual huge cut, but I still got first watch pancakes, smoothie king, and pasta at the cheesecake factory. It was a fun day, the rest of my team of girls from Catalyst got in town in the afternoon for pedicures and girl stuff as did my parents and even my brother and sister-in-law and for dinner.

Rules meeting was supposed to be at 8:00, so the group met up for breakfast at 7:00 and then we got on our way. Morning weight was 201, which was right where I wanted to be. Felt a little nervous on my way down to the venue. That was different, as I am not one to really feel nervous before meets. My biggest goals for this meet were to achieve 1000 lb total and to qualify for the 2016 Arnold Classic. It was hot as Hades and I was sweating just during warm-ups. I decided to make bigger jumps in my training cycle and take less in between weights, so that is what I did for this meet as well. My openers were easy numbers that I could get for a triple on any given day. These were 315 squat, 205 bench, and 415 deadlift. 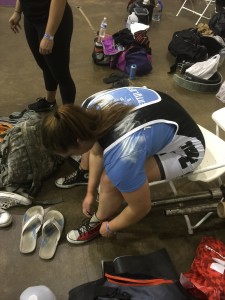 First attempt at 315 was like a cake walk, I didn’t really respect the weight very well now that I think about it, but I am not going to beat myself up over it. The second attempt was called at 340. This was the first number that I needed to hit for the 1000lb total. I have actually done this weight in the gym, so I already knew it wasn’t going to be an issue, which it wasn’t. Ted asked me what I was thinking for my third attempt and I told him probably 360-365. He called for 380, and as I approached it he told me to give it everything I got. To my surprise, it didn’t even feel heavy, it was an easy down and up and barely slowed down at all. I was extremely excited about this!

After I finished squats, I was sitting off to the side with a Rachel and Amber and I was curious to see what I needed to get for a pro total at 198. I didn’t really before this day think anything of it because I didn’t think it was anywhere in reach. I saw that it was 1075 and I immediately started number crunching. If I benched 235 and pulled 460 I could get there. I told Ted these numbers and I don’t know if he was really listening to me or not. I also talked to Molly on the side and told her and she reminded me to not get greedy, which she was right, so I tried not to mention them again. 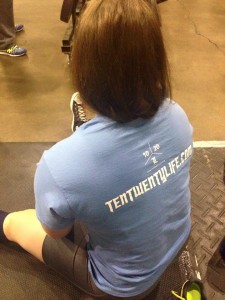 This bench cycle went very well for me. Each meet that I have done in the past year’s time has been a meet PR for me. This time I opened with 205, a year ago I would miss 205 on occasion, so I was grateful for this alone. This was an easy opener for me and my second attempt was 220. This was the second number that I would need to get to 1000, it was a meet PR, but I have done 225 in the gym pretty easy in this cycle. 220 flew up just like 205 so the third attempt was called at 245. In my head I would have called for 235, and I am almost certain that would have went, but at the same time, I also would have called a smaller number for my squat and I wouldn’t have ended up where I was. I just didn’t have 245 in the tank and I stalled about an inch off my chest. I was a little disappointed and needed to take a little walk, but then I had to remember that I need not to be greedy and be happy that I would be going into my deadlifts totaling over 1000 with just my opener. 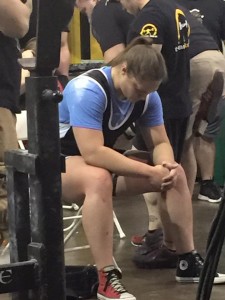 This training cycle the most I pulled the entire time was 415. I haven’t attempted anything heavier than that since worlds, in which I actually missed 450 but pulled 435 which was a PR at the time. 415 was a very easy opener, which put my total at 1015. At this point I achieved the two things that I came to do, but of course, as a competitive athlete, I still had the other numbers in my head. 440 would make a PR, that was the second attempt that I had in my head in the first place. The speed in which that moved I honestly couldn’t believe it. Ted asked me what I was thinking for my third attempt and I told him that I had nothing to loose. We had discussed what I needed again to get to that 1075 and that number was 475. He made the call, and I was mentally prepared to pick that bar up no matter what it took, I was going to give it hell. Sure enough, 475 moved pretty close to the same speed at the two previous attempts. I was so excited about this that I had a smile on my face before I even put the bar down!

1075 Pro Powerlifting Total; I hoped that day would come, but I didn’t expect it to be this day. Especially in front of so many family members and friends! My mom and dad always have been so supportive of me and everything that I do, they travel everywhere and have never missed a competition. My brother Trevor and sister-in-law Mendie, who got to see me move some weight in real life, pretty cool to have family that always supports you. My Catalyst girls, Rachel, Amber, Kristy, and Lieza, who are supportive and help me through all my training and life in general, and then come to be some of my biggest fans on meet day. The good people in Ohio that allow me to train with them as often as I would like and am in town, Todd Brock and Molly Edwards being some of the most helpful people in my training. My 10/20/Life team, these people motivate me and remind me that I am part of the best team around and I am always humbled by their performances. And last but definitely not least, my other half, Ted Toalston, who keeps me level headed, in check and in line, and is always so supportive. Thank you all for being the reason for such a successful and fun way of life. I couldn’t do it with out each and every one of you!

Sabrina is owner/operator of Catalyst Training Center in Grand Rapids, MI. She graduated from Grand Valley State University in 2011 with a Bachelors degree in Exercise Science with an emphasis in Health-Fitness Instruction and has been working as a personal trainer since 2010. Sabrina started her Powerlifting journey in early 2012 when she began her internship at Endurance Fitness Center and was introduced to the sport. Her first full meet was at the Detroit Barbell Relentless meet in November 2012 where she totaled 960 pounds, which was an Elite total and placed her in the raw top 20 all time for the 181 pound weight class. Since then Sabrina has done nothing but win, most recently n 2016 taking 2nd place at Laura Phelps' Cincinnati Women's Pro-Am totaling 1125 raw and 1st place at Relentless Detroit totaling 1443 both in the 198 weight class. Best Raw lifts: Squat - 410 Bench - 240 Deadlift - 501.5 Best Equipped lifts: Squat - 551 Bench - 352 Deadlift - 540