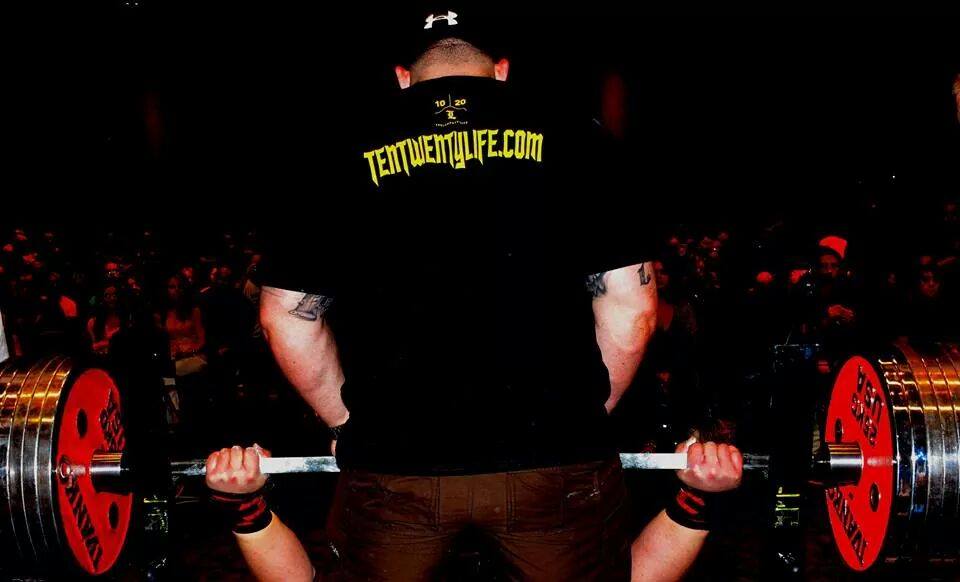 12 Jan My Introduction to 10/20/Life and the HUGE Improvements!

Get your Game Plan HERE

I started powerlifting in May of 2013. Although I had lifted weights since 14, played college football, and even had a short career in collegiate strength and conditioning, I had never pursued the sport.

Having never trained for the sport except for during football (how many football players do you know with good form?) I had a lot of form issues. Initially, I had someone put together a haphazard, 5-6 week meet prep and came in and totaled 1505 (565/305/640). The low bench was mostly due to this person widening my grip to an ungodly width, and destroying my shoulders.

My second and third meet, I hit totals of 1610 (605/355/650), and 1675 (640, 400, 635). I continued to progress on the bench and squat, but my deadlift was stalling, mostly due to comically poor form. This is ironic, since I am built to deadlift. I never felt comfortable reaching down and grabbing the bar during my set-up, so I would just raise my hands in the air like a maniac and grip and rip. As a result, I could only pull heavy every other week since my back was fried. I had absolutely no leg drive.

I met Brian Carroll and Jonathan Byrd May of last year, and had just bought the 10/20/Life e-book. First thing they both told me is that I need to fix my deadlift form—that, and that I should be benching much more. I read the book, and loved it for two main reasons—first, for its simplicity. What I saw was a way of training year-round that would allow me to correct form, get healthy and put on muscle in the off-season; and peak properly during meet prep. Secondly, I don’t have a coach, so I really appreciated the attention that was given to working on weaknesses and tailoring the program to fixing them. I learned about the lifter’s wedge, which is the position that gives you the best leverage on squat and deadlift. I began practicing this in the off-season, and I’m glad I filmed myself because I could see an obvious improvement in my form from 25 weeks ago.

Already so much better and tighter

I started my first off-season block in June, and did about 2 full blocks before starting my 10 week meet prep. This off-season I was able to stay healthy while slowly cutting down to 220 from 236, and most importantly set myself up for big PRs on my deadlift. On December 21st I pulled 302.5kg (666.9lbs). This pull felt so light and moved so fast that I surprised myself. I honestly could have pulled another 20-25lbs that day. So to make a long story long, this program works—If you follow it and trust the process.

Realizing the gains at the meet – when it counts! 20lb PR and EASY!

A few keys to making this program work for you:
1) Be honest with yourself about what your weaknesses are. If you’re not sure, film yourself and get a few pairs of eyes on your form so you can see where your sticking points are. The book gives you suggestions for every possible weakness.
2) Follow the warm-up. I always felt primed and ready before all three lifts after doing the McGill big 3, and hitting a lot of reps with the bar before I put some weight on.
3) Embrace the deload. I never felt beat down over a period of almost 6 months.

Get your copy HERE