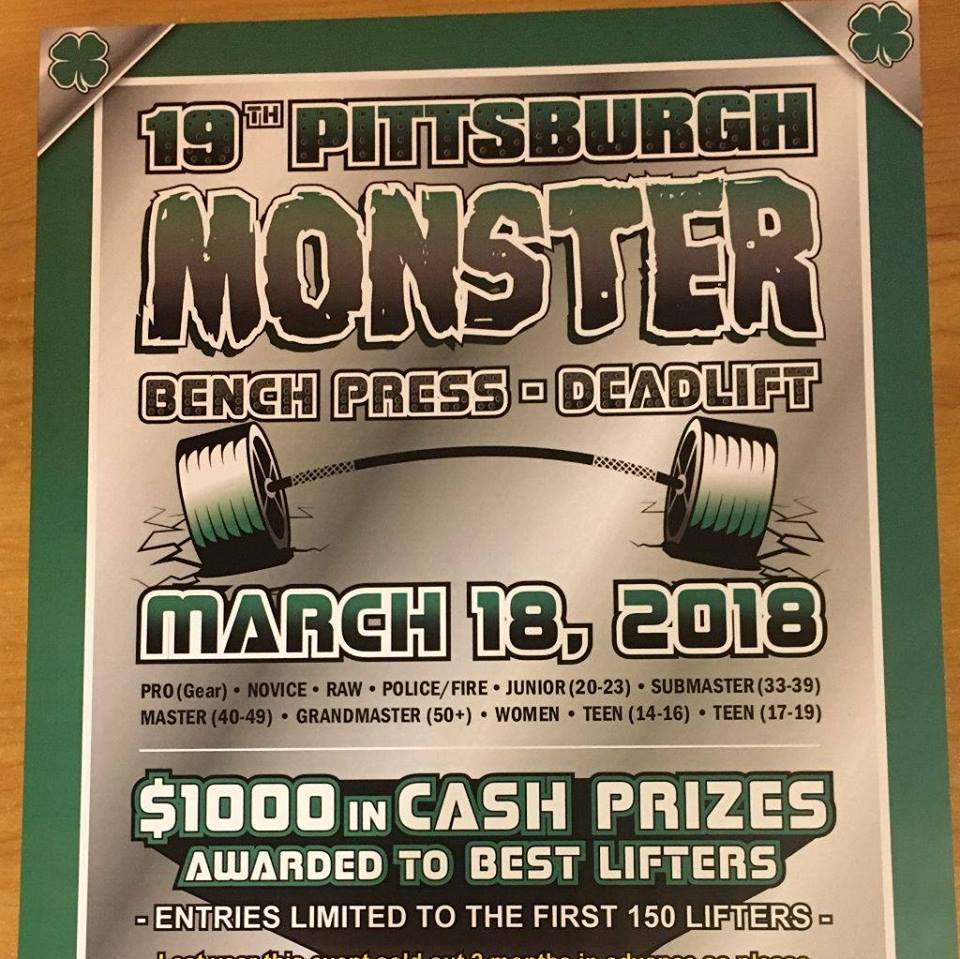 21 Mar Paul Oneid – A weekend in Pittsburgh, some Squats and THE MONSTER MEET

Due to personal and professional commitments, I have decided not to compete until Fall 2018.  Because I am taking such a long off-season, Tucker and I will be working together to shift my focus towards more bodybuilding hypertrophy work, with a diligent focus on my diet.  I need a goal and my body needs some time away from the competition lifts.  I am still diligently focusing on my weak points, but this is a new challenge and so far I am having a lot of fun – which is important!

Get your copy of the 10/20/Life Second Edition HERE

Get your Captain Jacked Supplements HERE

Grab your INZER Gear, the best gear on the market HERE

As I alluded to in my previous log post, I travelled to Pittsburgh, PA (more specifically Moon Township) this weekend.  The purpose of the trip was to be the MC of the 19th Annual Pittsburgh Monster Meet.  I love this weekend because it gives me an excuse to visit with old friends and catch up with people I don’t get to speak with as much as I would like.  Having lived in a few different cities, you lose touch with some, but whenever you see them again it is easy to pick up where you left off.  This meet is hosted by my great friend, Mike Barravecchio.  Mike is a police officer in Moon and has been a tremendous friend to me.  While I was living in Moon and working at RMU, Mike brought me into his training crew and his family without hesitation.  His wife Stephanie invited over for family dinners and I became great friends with his son, Zack and his daughter, Jessica.  Mike is as genuine a person as you will ever come across and it is evident with the care and attention to detail he takes in organizing his annual Push/Pull meet.  I have said it before, The Monster Meet is my favourite powerlifting event.  It is everything that powerlifting should be – all the good, none of the bad.  I am very thankful to have lifted in 3 Monster Meets and MC’d 3 as well, now.  Next year will be the 20th and final year and I cannot wait to see the turnout.

While I was away, I also did some lifting.  I headed down to Union Fitness to train with former PRS teammate and EliteFTS lifter Casey Williams, as well as EliteFTS lifter Yessica Martinez and their great crew.  Had some fun and threw the wraps on for a couple singles.  I kept things under control, as it was a deload week for me.  Finished with a single at 605lbs (75%), then did some singles sumo with 420lbs (60%).  As far as my performance, it was shaky.  The weights moved well, but finding my balance was tough.  I don’t quite know where my feet should be to allow me to stay centred.  It will be a long process to get strength back, but I am really happy with the progress I have made on the bodybuilding work and my body composition is drastically improved.  That was the goal.  I will be continuing my current plans until May 1st and then transitioning back into powerlifting specific training. I am almost at my goal, so having a timeline has lit a fire under my ass.