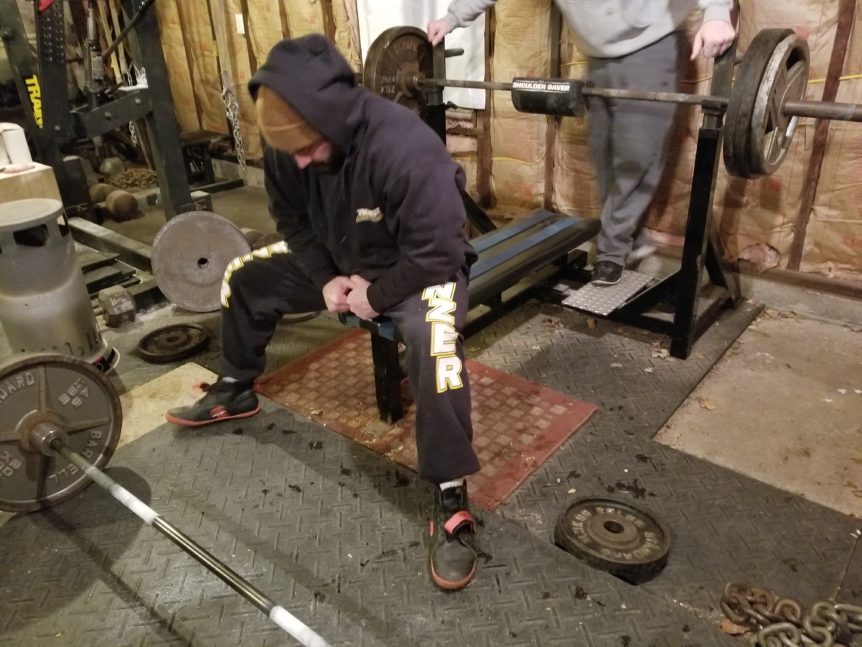 Posted at 10:06h in Team Training Logs, Zane Getting by Zane Geeting 0 Comments
1 Like

I’m currently in an off season training cycle working on getting back to some normalcy in training. My schedule has been very hectic as of late and training became very inconsistent because of it. I’m now back on track and hoping to get things back to a good base level so I can pick a meet in the near future. My goal will be one of two things at my next meet, either increase my best raw total of 1720@198 or to get a pro raw total at 220.

As I said in my last update, I’m going to give a look at my squat cycle and how its looking in this 2 day per week, 3 lift split. But first a quick update on the last 3 training sessions…

Squat- In my last session I worked doubles up to 530×2, then did some high rep belt squatting (10-15 reps per set.) I finished up with some upper back work and the ab wheel.

Deadlift- I pulled sumo for the first time since March. The goal here was only to get into a comfortable position where I felt strong. It’s going to take a little work, but I did manage to do a few doubles with 565. I followed the pulls up with high rep belt squat (15-20 reps) then; chest supported rows, pulldowns, curls, and standing crunches

This was done over the course of 8 days, on day 10 or 11 I will be back to squatting. So lets talk about the squat cycle and how it looks. The basics of it look pretty much the same as the bench cycle.

Session 1- Squat 3×5 with a top set at an RPE of 7 or so. I follow this with belt squat for high reps to get some lower body hypertrophy without stressing the lower back. My accessories right now are putting a heavy focus on the upper back and core stability.

Session 2- (There are 10-11 days between squat sessions) This week is 3×3 with one top set of an RPE around 7 again. The secondary compound movement and the accessories stay the same.

Session 3- 3 sets of 2 reps with one top set around the same RPE as the previous weeks, same secondary movement and accessories again.

Session 4- This is where we would normally deload, and it is still an option, but as of late, with the extra recovery time between sessions, I’ve been going right back into a second rotation of the first three sessions. So, this week would be 5’s again, shooting to go at least 20 lbs heavier than session 1, but not to exceed an RPE of 8. Being honest with ones self is very important here.

Session 5- A repeat of session 2, again with the goal of increasing weight by at least 20 lbs. without exceeding an RPE of 8. I would also add more weight on the secondary movement (belt squat) as well to keep constant gradual progression going.

Session 6- A repeat of session 3, with the same rules as sessions 4 and 5.

Session 7- This now becomes the deload, and most likely a hard deload with little to no training. Instead, something like a chiropractic adjustment and some massage would be take, time permitting of course. At the very least some light mobility work and stretching would be done.

Other than that its been business as usual, putting in roughly 53-55 hours a week at the dealership, plus my 9 hours of drive time for the week, and another 20 hours or so on the farm. Training has been happening 2x per week consistently for the last few weeks and should for the foreseeable future. I am taking my first real vacation (non powerlifting related) ever this February. We’ll be spending a week in FL hopefully catching up with the Carrolls, hitting a Deicide concert, then going to hang out with my parents in Cape Coral. Kind of funny that this will be my first real vacation as an adult and I’m 35 years old, lol. Needless to say I’m looking forward to it, but kind of nervous since I’ve never been away for that long, and I’m having to put a lot of trust in a farm hand to make sure things go well while I’m gone. Fingers crossed.