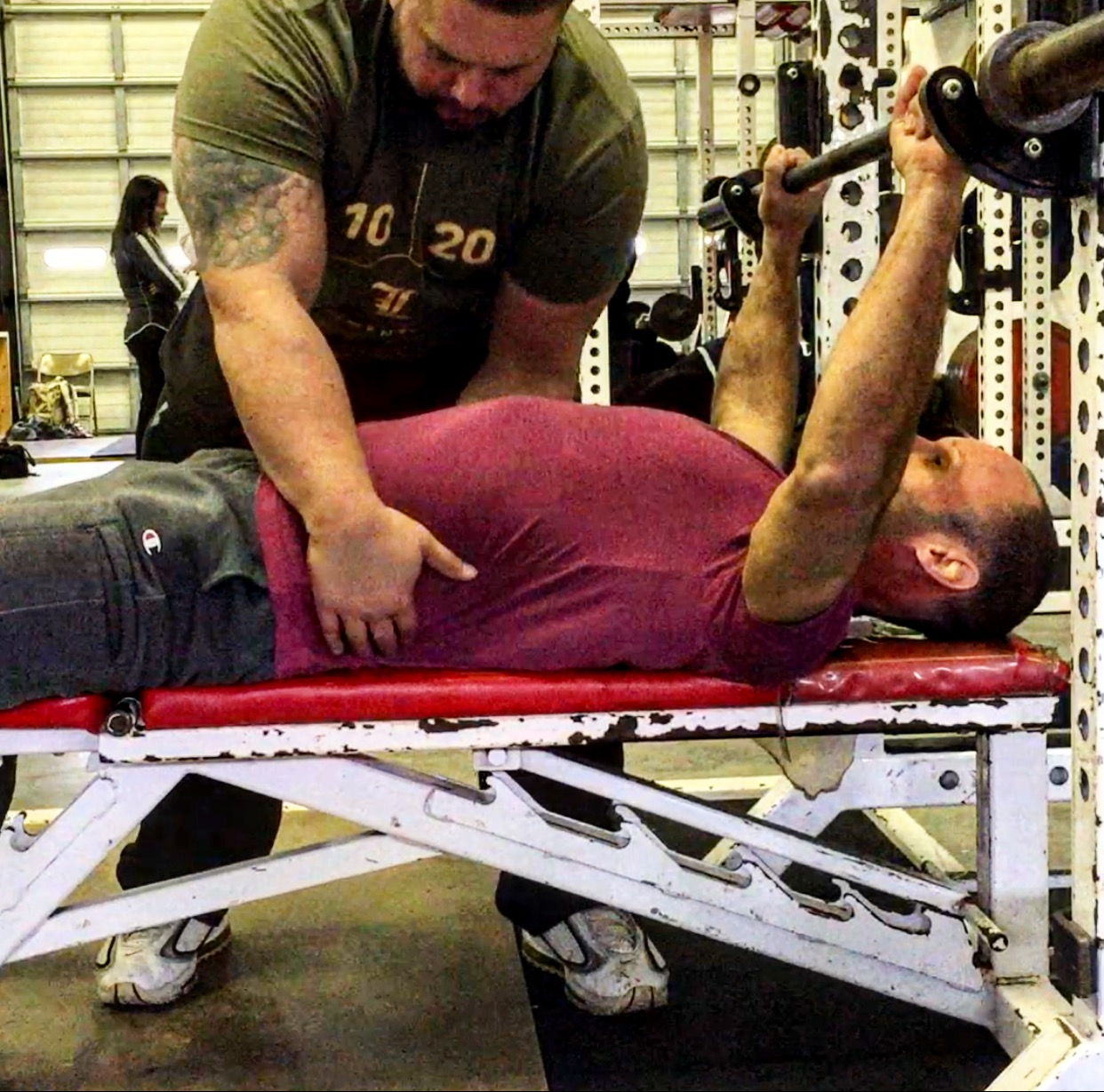 Currently training for the XPC Finals at the Arnold. Working my body weight up to 290lbs and making the cut down to 275 class. I will use the protocols from Brian’s Manual“CUTTING WEIGHT”

As always I am fighting off nagging injuries from my past years of complete dumb ass training.

Its hard not to be happy after a weekend like this one! Seminars are always fun, always tons of laughs, and always leave learning something new. This weekend was no exception down at Crossfit Wilmington. It was a nice visit for me, being from eastern North Carolina, and only about an hour from Wilmington.

Brian and myself came down after work on Thursday. For those of you who do not know, I run a special education program for students with extreme behaviors. We had a pretty rough day on campus, so I was more than happy to get out of town for a few days! The trip wasnt bad, we made it there in a little less than 7 hours. Traveling is never really that bad, we got a chance to talk about future plans, Arnold prep, and made some calls to team members. Brian does a great job at knowing whats going on with the entire team, and making sure if they need anything from him, he does his best to help. It never stops surprising me, how far the people on this team will go to help each other. 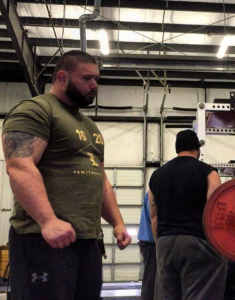 We made it in around 10, put together plans for breakfast in the morning, and crashed! Friday morning was the first time I had the please of meeting Tony Cowden. I would love to just continue to make fun of Tony, but Im pretty sure he might kill me at some point in my sleep, so ill just say he is a great guy!

After breakfast we headed out to Crossfit Wilmington to get some training in. Brian and myself just did a little fluff and buff session, while Tony worked on some squat and deadlift form. Beth got in her briefs and did a few sets of doubles. It was nice to have a down weekend, because the next few weeks of training will be difficult. I will really be pushing the numbers, and hopefully peaking correctly on the stage at the Arnold. Gym lifts mean nothing in the big picture, meet results are what matters.

After a quick nap back in the hotel we all went out to dinner at Poe’s. I came to a few realizations at and on the way to dinner.
1. Will Kuenzel eats more than 95% of the SHW in powerlifting.
2. We should always use a 2-1 seats to people ratio when we go to dinner.
3. Scott Paltos really cant drive, and I fear for anyone who rides with him! 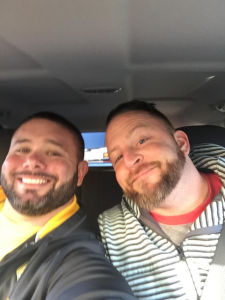 Saturday morning was when all the fun started! We had 20 or so people in attendance, all of which came open minded and very willing to learn. Like always we try to dictate topics based on what the group preference is. We started the morning with introductions (You can see this on my facebook page), and then jumped into the philosophy and mindset of 10/20/Life. Like always we do a ton of hands on coaching. We started out with warm up, and then moved to the squat. Will and I worked with the taller lifters on the squat, and honestly we click well as coaches. I really enjoy working and coaching with Will. I really feel like we did a good job fine tuning and adjusting a lot of squats. Most common issues were breaking at the hips, and weak/not tight upper backs.

I was luck enough to lead the instruction on the bench portion. Like everything in 10/20/Life we coach on the same core and fundamental principles, so really anyone of our coaches should be able to step in and give the information, but its always nice to be asked to do it. Again I was paired up with Will, and we broke apart a lot of benches. This is always fun to see the reaction of people who are not use to a proper set up or bar path. 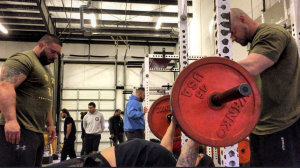 I also got to watch Paltos work with Kimberly Lawrance on some yoke walks after the seminar. First thing I thought of was that it looked really fun. Right up until the point that it started to get heavy, then I thought….well that looks like I would die under it haha! Was just interesting overall watching Kimberly get ready for the Arnold, and Paltos help her work on some form things. This is an area that I know very little about so it was fun to watch. 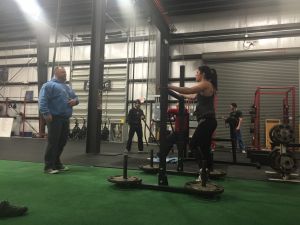 After the seminar, quick nap, and shower we went out to eat at a local sushi place. Was nice to have the whole group together in a none working atmosphere, although we just end up talking about training and the seminar anyway! Again, I learned that Will can out eat damn near anyone I have ever known, and that is saying something! I wish I would have took a picture of his sushi order, it was damn impressive to watch him put that away! 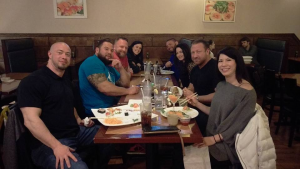 Sunday we kicked off the seminar with a quick review, then some nutrition information. I pretty much avoid this topic and just listed rather than talk. We decided it would be good to live stream some of the hands on and coaching portion of the deadlift. We had nearly 200 people watching during the stream, which I thought for just throwing it up was pretty successful.

We finished the day Scott, Beth, and Tony working with people in the Olympic lifts, while Brian and I covered powerlifting topics with those who were not interested in working on the Olympic stuff.

Overall it was just a great time. It was good to finally meet Tony, along with a lot of the crew from Crossfit Wilmington including Melissa Hoff, Jana Fogleman, Albert Steed, Kimberly Lawrance, and several others I am sure that I missed. We were also luck enough to have Crystal and her family down through out the weekend. She is always a good help and is a quality addition to the team. 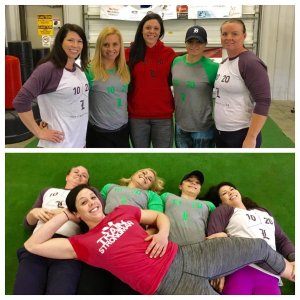 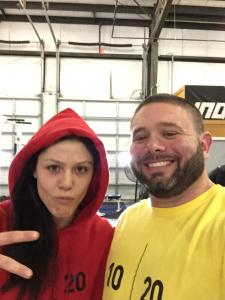 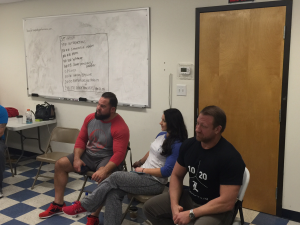