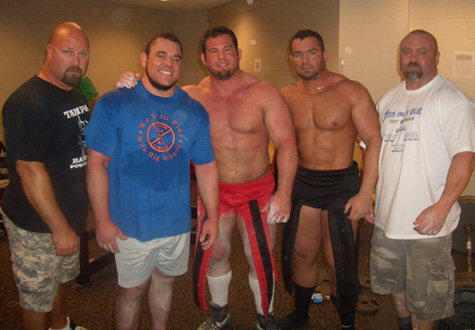 I'm currently training in an offseason approach using the 10/20/Life method. I've only been back to training for about ten weeks, and shoulder has been excellent, with very few roadblocks and setbacks. Huge thanks to Andrew Lock for the help in my shoulder progressions and understanding a better way to incorporate more efficient cervical, thoracic, and rotator/shoulder training into my approach. Still so much to learn! We have a few guys prepping for the RPS meet in Orlando July 27, so I have taken my training up a notch. It's been fun following along and taking training a little more seriously, with more of a priority on getting back in shape. I have no meets currently planned for now and I'm not likely to lift at the WPO in Chicago this year. I cannot commit to taking up a roster spot at this time and told some of the powers that be this months ago. So I'm planning for something else, some other time, not sure when or where.

Training has gone well, and I’ve been slacking with my posting, sorry about that. I need to be better about not overcommitting, but it’s been very crazy over the last month.

Training details: We’ve been utilizing Bands and chains over the last few weeks, and I’ve really enjoyed the change. Tom and Steve are currently prepping for July 27, and I’m looking forward to seeing them have a nice showing.

Lifting has gone well, but I’ve started to fall into some old bad habits. I’ve let a little bit of anger back in at some points due to losing three good friends over the last month. Passion because these were good people and I can’t understand why. But the truth is it’s not up to me. When your time is up, it’s up. I’m okay now, but to those who pray, please lift me up this weekend as it’s going to be a difficult one for me.

One was an HS friend, and Navy Veteran with his entire life ahead of him, and died in his sleep. He was only 38. I grew up playing ball with him, fighting alongside him, and him being partly responsible for my growth spurt after high school, where I gained 20lbs in about 6mo as I started getting serious about lifting. Lee was a great dude and had your back. He was a big supporter of my work and often offered wise advice for my business and helped spread the word of what we are trying to do.

I’ve written about Bob Young’s passing, and this weekend I get to go to Boyton Beach to celebrate this great man’s life. Talk about bittersweet; it’s certainly more bitter than sweet, but he would want us celebrating his life, not being sad and mourning his early passing, though that is impossible. I’ll write more on this soon, but Bob’s smile was infectious, and his wisdom was next to none. I can remember when I started my comeback after meeting with Stu in 2013, Bob told me as I was getting back to the weights: “keep what you do, and what you tell people close to the vest.” I then asked, “why?” Then as he told me “some don’t want you to get better, and would rather see you done with lifting, so stay the course and don’t let anyone distract you from the end goal.” I took this advice to heart and never forgot it. Bob also told me that I became a better person and lifter when I got married. Now, I knew this subconsciously, but nobody had ever spoken that over me and laid out the facts in his unique way. I’m going to miss our talks.

And last week, on the way back in from a fun fishing trip, as soon as my phone had service, I had a bunch of messages telling me that Rick Lawrence had a massive heart attack and passed. Rick is someone I met at my first meet when Rick was one of only a few people benching mid 600’s under 250lbs, very close to the ATWR at 220. Rick ran many competitions in NPR, FL, and I was fortunate enough to compete in his meet in 2004 and hit my first 2000 total. The following year, we returned with new lifter Clint Smith, and Clint also hit his first 2000 total! Rick would do anything for you, and always had such a big smile on his face, loved powerlifting, and most of all loved to see people enjoy themselves while achieving their goals. Again, bittersweet going to celebrate his life this weekend as well.

So, I’m off to NPR in the very early AM to celebrate Rick’s life, then over to Boyton Beach Sunday to celebrate Bob’s life. So, I will be taking a deload! I’m grateful to have had these guys in my life, and going forward I’m going to appreciate the time I have with my friends still here, and cherish them more than ever.

As always thank you to my co-brands Inzer Advance Designs and Jax Nutrition.

I was thinking my leg drive was improving, but after reviewing the video, I have to say the lower half needs to be more involved, yet! But, getting stronger as I added another 100 in chain, and still moved it decent. My weights are very unimpressive but I’m slowly rebuilding. Brick by brick. And with no meets planned, I need to make sure my shoulder is healed up completely, so I’m taking my time. It’s been about a 9/10 as for as cooperative.

Back to sumo. I wasn’t at peak form today. I should have probably shut it down or took my time and fooled around with the chains a little longer to make sure they were even, but I didn’t. Really having fun going back and forth on the style and approaches.

This weight pushed me to about a 10/10. I can get up for single reps pretty well. I got extra motivated because I went right from 465 to 555 and knew that if I was going to go over 550, I needed to be fresh. I had someone doubt me, and ask me if I really wanted to go that heavy, so I had to turn it on. It felt good to have wraps on for the first time since Nov 2018.

All in all, training is going well. I’ve had a lot going on. Also, If you notice, the dates are a little wonky because I had a few surgeries and a tooth pulled, so I had to take a few days off here and there.

Diet WAS on point, but July 4th always gets in the way of that! All in all, I’m following a template that Stan and I created with the Vertical Diet.

I’m happy to announce that I’m now carrying the Vertical diet 3.0 in the shop, as of this week. I really like this approach to dieting. It’s not a fad diet, but someone you create which is sustainable and enjoyable. As Stan says, “compliance is the science.” For those who would like to read more about the vertical diet, please see this article from earlier this year: Five Changes for 2019 and I’ve done a decent job at adhering to this.