First thing I need to say, the 2015 Arnold was an experience of a life time. The place was packed, music loud, and some amazing lifters on the platform. There is no other way to describe the event than to simply say impressive. The XPC has grown every year, and packed the place this year. When I approached the bar for my first squat attempt, it was standing room at best in the building. Even the warm up area was packed with people just watching. It was an amazing experience to say the least.

Most of the 10/20/Life crew arrived to Columbus on Wednesday, to get settled in and adjusted. This was also my first real weight cut and I knew I needed to prepare for the worse. I was coming down from what I thought was 288lbs. I spent most of Wednesday just hanging out at the hotel with the 10/20/Life crew. Thursday morning we went over to check the meet scale and to see where everyone was sitting. The meet scale and our scale was about 2lbs difference for me. This meant that I would need to get off an extra 2lbs I had not accounted for, but should not be that big of a deal. I was lucky enough to have Brian along with me, so it makes things like this much easier. Lucky for me I was ahead on the cut so it was simple to get the rest of the weight off. If you do not have a copy of his cutting weight ebook, you are missing out!
After cutting carbs, water loading, and using the bathroom enough for the next week I headed over to the meet site to check my weight. We were not allowed to weigh in until 230pm due to being in the afternoon session. I was at weight when I arrived at the meet, and decided I would let a few more pounds come off before official weigh ins. During this time I got to watch my training partner Filipe Gusmao lift as well as 10/20/Life lifter Brandon Crabill. Neither had the day they were looking for, but it was still a pleasure to support my teammates.
The afternoon session had several teammates lifting in it including Allison Lockhart, Beth Thomas,Marc Tejero and Zane Geeting. I will let them tell you about their day in their log, but it was great to watch them all lift and perform at a very high level. Allison had a very nice day with PR numbers, Beth placed overall at the meet, Zane’s come back meet was a success, and I’m not positive of Marc’s final numbers. 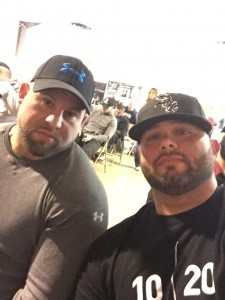 While watching them lift, Brian and I started to get fluids and food back in us. I was feeling near death and was not a happy person. My cut ended up being just over 17lbs, which for a lot of guys that is easy. Final weigh in was 272.8, which of course is the lightest I have ever lifted at. It was easy to get the weight off, but the mid-day weigh in sucked! After squats Brian and I headed back to the hotel to finish rehydrating. I really hate missing the deadlifts, but that as supportive of a teammate as I was trying to be, I also needed to be slightly selfish and get my fluids in.

A few last thoughts from Friday
1. Allison Lockhart’s quads put mine to shame; I really need to get to work!
2. Beth Thomas is an even better lifter than I realized.
3. March Tejero is a master of his form.
4. The guys from Team Samson work harder than anyone in the building.
5. Scott Paltos will do anything to help a teammate.
6. The XPC is growing.
7. Zane is either mentally tougher, crazier, or just flat out dumber than me, I like him! 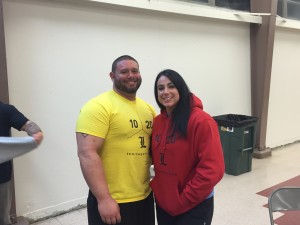 I will do my meet write up tomorrow!