03 Nov Down Time, Goals, and a Reminder of Success

Well the play time is over! I had a great weekend as it was homecoming at Methodist University. I was able to get away for the weekend, watch the game, and see a lot of former teammates and coaches. Of course it turned into a weekend long party and a very vivid reminder that I am old! The Methodist University itself has changed greatly over the last 10 years, and I must say I am proud of what it has become. The coaching staff at Methodist is doing a great job bringing in high quality student athletes. I am not sure of the exact number of new buildings and remodels, but it is very impressive for a small college campus. I think the growth is a real testament to President Hancock and his ability to grow the University on many fronts.

The game itself did not turn out as well as I had hoped, but there is no doubt the future is bright at Methodist University. I would really like to thank Coach Goss for his extension of invites out to former players. We were all given sideline passes, our own tent in the end zone during the game, and made to truly feel welcomed. It is clear that he, his staff, and the University have made the commitment of bringing the alumni base closer. This will pay off in the long run, and I think the results are already starting to be visible.

I tailgated before the game with some former teammates and my offensive line coach. Coach Funderburk has since moved on from Methodist University, to other coaching positions and jobs. It was great to talk with him and catch up. I owe him more credit for my success than he will probably ever understand. The lessons he taught me about work ethic, attitude, and success were truly valuable. I was able to speak with another one of my former coaches later that evening, Coach Dave Eavenson. Coach Eavenson is still part of the Methodist staff as an Assistant Director of Athletics. We spoke about how often the difference in a team’s success is the buying into the system, and trusting one another. I really feel we have that here with our 10/20/Life team. We all believe in a system that works, and trust in each other’s feedback.

Ok, so now to the stuff you guys actually care about! I am just over 16 weeks out from the XPC Finals at the Arnold. I am selling out and making the full commitment to lift in the 275lb class. I started today by laying out my food plan for the week and all my supplements. My biggest issue will be that I need to cut out soft drinks. That is really my down fall! I do need the caffeine in the morning, so I attack it two ways. I am currently mixing my Usplabs Oxyelite protein with black coffee in the morning. Later that day I mix a scoop of Usplabs Aminolift in a bottle of water for a pick me up. I really like the taste of both of them, which is huge for me. If something tastes badly, I am not going to drink it! I am cutting my carbs down a fair bit, and cutting out all fast food. I am currently 292lbs on wake up, so it’s not that I have a bunch to lose, but more that I want to keep lowering my body fat. I am stronger now than ever, so let’s see if I can put it out there on the platform. 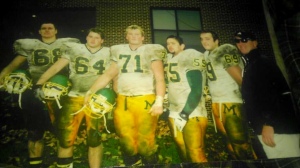