28 Oct Is Benching in a Cast Still Considered Raw?

Around a year ago, Scott Tully had a conversation with Ben Moore that eventually led to him reaching out to 10/20/Life coach Jonathan Byrd. After getting back into competing after a four-year break, 10/20/Life – primarily Brian Carroll’s experience with back rehab, the warm-up protocol, and the focus on training longevity – appealed to him. At the time, Tully was working 12+ hour days at Driven Fitness Center, a gym that he co-owns in Salina, KS. “I wanted to not think about my own training for a while,” Scott commented on why he sought out programming help.

Tully added 100 pounds to his previous meet total after his first competition prep with Byrd, who handled Scott’s programming for several months. He eventually began to do it himself using the 10/20/Life principles with some additional help from Jon. Later, Scott was prepping for a meet on October 17th and at the time, his deadlift was up around 100 pounds, his bench 40-50 pounds, and his squat about 70 pounds from 11 months prior. 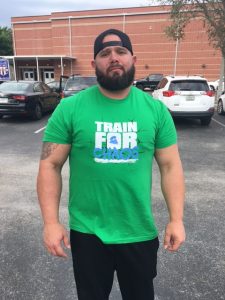 Scott recently competed in the Great Plains Regional Powerlifting Championships in Wichita, KS…in crutches. In addition to powerlifting competitively, he also does strongman and was planning on a competition in Las Vegas around a month and a half before his powerlifting meet. Scott, who turns 40 in November, wanted to hit one more strongman competition in the open class before transitioning to masters. “Training had been going great. My deadlift was approaching 700, bench was better than it had been in years, and squat was really coming around,” he said. “So the plan was to hit Sin City and then the Great Plains meet six weeks later.”

Tully went into his strongman competition with no injuries and his body feeling great. He started out the day properly hydrated and had a good run at his first event (325 pounds per hand farmer’s carry for 80 feet), where he placed fourth out of 11. The press medley followed, and that’s where things turned sour. “While dipping to push press a 280 pound log, I completely ruptured my quadriceps muscle. When I went down, I dropped the log on my opposite foot and ankle, causing a deep bone bruise. Let’s say it was not a fun trip home,” Scott said.

Two days after his competition and subsequent accident, Tully was in surgery to reattach his muscle. The six weeks leading up to his powerlifting meet were spent in a split for two weeks and a cast for four. Almost right before the meet, his cast was removed and he showed up to weigh-ins in a leg brace. While Scott originally planned on dropping out of the competition, he was given the okay to bench despite being in a cast. “My bench started coming around pretty well, even though I had to prop up my leg to leave it straight out,” he said.

You might be wondering why he decided to go through with his competition despite his injury. Tully wanted some motivation for training, but mainly just wanted to get back around the sport. “I competed due to hearing excuses about why people can’t train or why they aren’t ready to compete,” he said. “I figured if I can train in a full leg cast and bench with one leg, then maybe it will motivate people to sack up and put it on the line.”

Scott competed bench-only in sub-masters SHW and weighed in the night before the meet about 30 pounds lighter than he was a year before. Although he knew not to expect to push up his biggest numbers, he still went three for three. “I hit all three attempts at 353, 375, and 385, all raw. I left a good bit in the tank due to playing it safe,” Tully said. “You have to set new goals. Even though I’m not a good bencher, it makes me improve the lift.”

While recovering from his injury, Scott continues to utilize the 10/20/Life principles. He currently still follows the warm-up protocol and deloads every three weeks while using the RPE system for his training. “I’m on crutches for a few more weeks, and my first PT session is next week to recover range of motion, “ Tully said. “It will take the better part of the year to fully recover.”