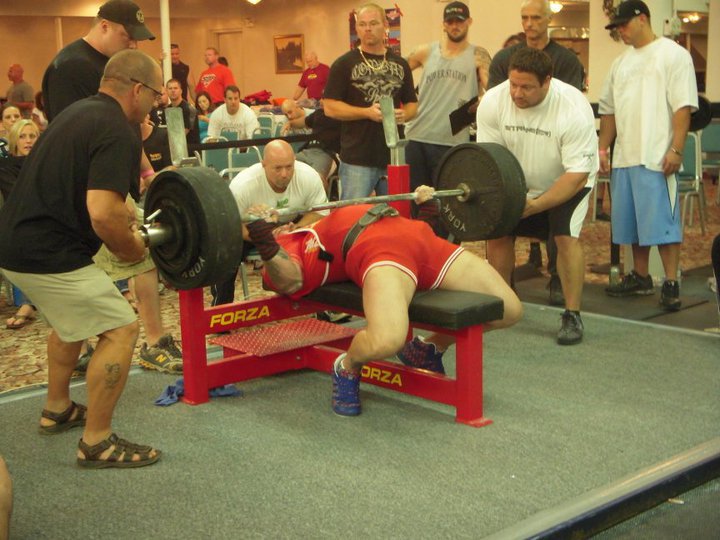 09 Feb Saturday night, oops I did it again, and shirted benching from Sunday, with video

I’m currently training to make my comeback to the platform for the XPC finals at the Arnold Classic in March. Its been close to 2 years since I’ve posted a total, and its time to change that.

So, I’ll start with Saturday night. Dumb, dumb, dumb. So, the wife and I went out to a local bar for dinner. Little did I know, the bar was going to be packed with people who’d been out riding snow mobiles all day. After I finished my dinner I hit the rest room before we got ready to leave. On my way out of the restroom a couple older women stopped me and asked me if I would lift them up so one of their husbands could take a picture. I looked them over, they were small enough, so I said what the hell. I had them throw their arms around my neck, scooped them up with my forearms underneath their asses, and picked them up. Well, on the way off the ground my left biceps/brachialis said SNAP. I immediately set that woman down and stood there staring at my biceps while still holding the other one. The woman on the side that tore, said, “what was that?” to which I replied, “Oh, you know, just a muscle in my arm tearing off.” She apologized and felt super bad, I walked back to my table, pissed at myself for being stupid.

I’m writing this Monday morning, most of the swelling is down, and its starting to bleed out down by the elbow. The tendons are all attached, and the biceps appears normal, but there is definitely some damage to the brachialis. I’m going in later this afternoon to have an ortho check it out and give me his assessment. Fingers crossed that its just some muscle tissue in the brachialis and I’ll still be fine to lift at the Arnold. Whatever it is though, I can’t curl a 10 lb. DB without some very sharp and severe pain.

So, Sunday morning I was meeting my teammate Josh McMillan at the gym. I figured it would be a good chance to see if I could still bench with the injury. After all, straightening the arm doesn’t hurt too bad (except for the last inch or two) its just retracting it that causes issues. So I got to the gym around 11:30 am and did the following:

A lot of benching with the bar

I couldn’t do my normal scarecrows, side laterals, fat man rows, etc. because of the arm.

Did some extra reps and warmed up to 290 raw

– You’ll see in the video that I locked out very slowly and deliberately, this was just to make sure I wasn’t messing the arm up worse. It did increase the swelling a little bit, but didn’t seem to cause any real pain or problems.

Like I said, the slow lockout was done on purpose. This will be somewhere around my opener at the XPC finals. Obviously I was very pleased to be able to bench.

– That was the end of it. I’m going to have some trouble hitting the upper back and shoulders for a few weeks here, but honestly I don’t think its going to hurt my numbers too much. I can squat with the SS bar, do GM’s, etc. right up to the meet. Its not prime, but I’m not going to let it keep me out. So, lets just pray that the arm doesn’t need surgery, and that I can just rehab it while working around it.