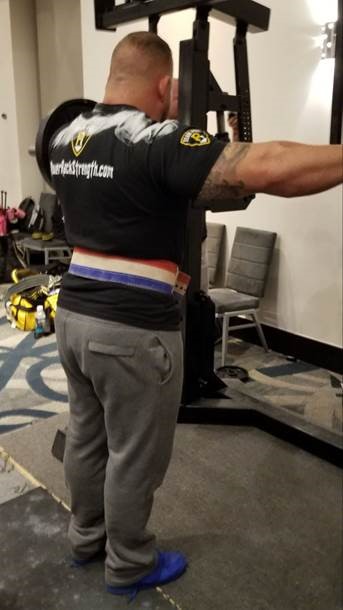 (First off, we would like to apologize for the lack of posts lately. We’ve had guys missing from the gym for various reasons and have simply lacked on posts. We apologize and will be getting back on track starting now.)

In this article we will only strictly talk about the team experience from the WPO and what all transpired. We will not share results. Stay tuned for Brian’s article when it comes out.

Brian went down to Orlando earlier in the week, so he could stay focused and start his cut process for Saturday morning. Brian weighed in at 241.9 Saturday morning for the 242 class on Sunday.

For the rest of the team, a couple of them (Keith and Mike) trickled in late Saturday afternoon. Clint and Filipe showed up later Saturday night. A few of us went down to the resort restaurant to catch some of the college football games and to grab a bite to eat. Brian showed up after a bit and filled us in on the plan on Saturday morning.

Typically, we as a team get together morning of the meet and get breakfast, however, this was going to be different. The meet was going to start at 9, there were 4 flights and parking was going to be scarce due to resort guests and fans in attendance. So Brian decided for us to all meet downstairs early in the AM, go and grab us a spot in the warm-up room and play it by ear since there were 4 total flights and the first 2 flights were all women. Brian knew he wasn’t going to be lifting until around noon-ish since he would be in the 3rd or 4th flight.

Saturday morning rolled around and we met downstairs. We grabbed a few chairs behind one of the mono-lifts, set Brian’s gear there and claimed our spot. Or so we thought. An older gentleman walked up and tried to sit in one of our chairs (as we are standing 3 ft from it). We informed him those were ours and then he got all mouthy about reserving chairs (mind you there were about 100 other free chairs in the warm-up room at this time), so we basically shoo’d him away as it was too early and none of us had coffee yet and nobody wanted an altercation.

Warm-ups started around 10am. Light squats to get the blood flowing and hips moving. Brian was the last lifter in the 3rd flight on his 1st squat attempt. There were 4 monos and everyone meshed well with jumping in and taking turns on warm-ups. I think we had about 5 lifters at our mono taking turns. For Brian, warm-ups went well, weight moved easily, and now time to go sit near the ramp for when it’s Brian’s turn.

WPO had a platform holding area behind a curtain that 4 lifters were allowed on when they were the next 4 to the platform. Each lifter was allowed 2 handlers. Belt. Knee Wraps. Chalk. Rib cracker. Gatorade. We had everything we needed. Once Brian was ready to walk to the lifting platform, we had to run around to the side hallway so that we could call his depth and be there to support him.

After squats took place, there was going to be a long break between the normal break time and then once the 3rd flight started benching. A few of the team members grabbed lunch, sat down and relaxed for a bit. We were 1/3 of the way done.

Bench warm-ups started around 3:30ish. Warm-ups with boards to start and then time to get the bench shirt on (Always a process with warm-ups because you don’t want to go too fast and then have a long time before you get to the lifting platform. But also don’t want to wait and then have to rush your warm-ups). The handoffs on warm-ups were off and everyone felt it. They had the bench on a 8×6 platform and it made it difficult with a 3-man handoff. But, we eventually realized that and knew we would be fine once we got to the lifting platform.

Platform hand-off went great, as expected on all bench attempts. However, on the 2nd attempt there was an issue between a team member and a judge. One of our team members jumped around to the side of the bench (which he is allowed to do) to call Brian’s depth and one of the judges got up, shoved him out of the way and said “move out of the way”. After the attempt, we were on high alert because the shove was completely unnecessary, unprofessional and we as a team were backing our guy. Keith was definitely the better man that day and we commend him for that.

As a team, we might rag on each other in good fun, laugh at each other at someone’s expense, but at the end of the day we are a team and we are all here for each other.

By the time you’ve read this article, Brian has posted his, so you know this was the last attempt Brian took. For the team, we encouraged him, supported him, and he gave a hell of an effort and we were proud of him. It was great for us to be able to join him at this big event and to be there for him.

You can read more about what happened during bench here

We also would like to give a HUGE thanks to Will Kuenzel and Ben Sheard for showing up and helping during the meet. The extra hands and support were greatly appreciated. Thank you, guys!!