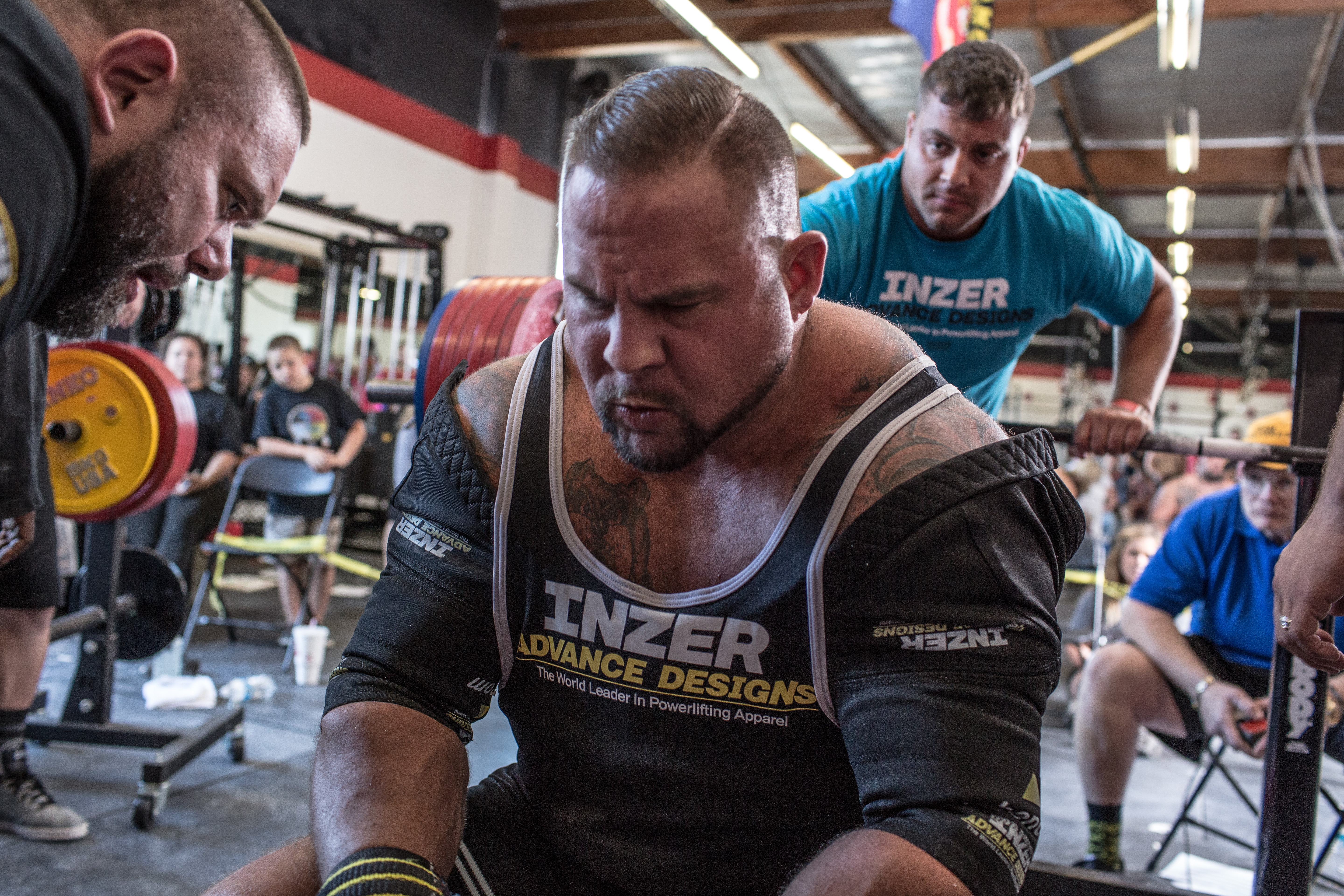 13 Mar The Background Going Into The Arnold Part 1

2014 was a very interesting year for me, but there were a number of thoughts going through my head over the last 371 days since the last Arnold. Last year it was held on 3/1/14, where I sadly had to pull out as I was in the lead going into the deadlift. Those that were there at the meet and those that knew me well knew just how much this hurt me. I battled back all year, thinking that I was ready to get on the big stage, though come to find out I rushed the process a bit and was not ready. There was an element missing and it took a little while to figure out what that was.

To be frank, I wasn’t sure that my back would be good enough to pull anything significant again. I didn’t know if 700 would ever go again, pain free. I returned to training and I had difficulty deadlifting, especially after benching just like the meet. This was very hard to deal with as I didn’t see a solution. I’d come so far in the last year of rehab, but still came up short right when it counted. This was very hard for me to swallow. I felt like a fraud in many ways and this was not a good feeling.

I knew that I would be back, but just wasn’t sure how!

I talked with Dr. McGill and he liked my idea of combining all 3 lifts on one day and building more tolerance. This was THE key for me, but didn’t show itself as beneficial until I got my diet in check and bodyweight down, which I will touch more on further. 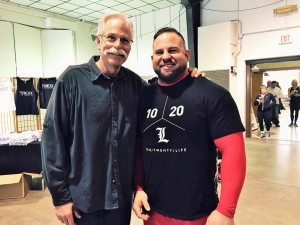 About one month after the 2014 Arnold XPC meet, my former sponsor removed me off of their site, which I did not leave on my own. This was due to many assumptions involving the other party. The entire situation could have been talked out and made a win/win for all people involved. However, the opportunity was never presented and I was accused of trying to get over on ‘them’ by multiple ‘anonymous’ parties. I am thankful for what I learned during the time that I was with the company. Further, I am thankful for the people I was able to meet.

This was actually the best thing that ever happened to me in many ways, so thank you!

I lost my business partner one month later in May, due to a blood clot that traveled to his lungs. He was the ANGRY coach who edited and helped me write 10/20/Life. Bob was only 43. This really hurt me and I was not ready for this, as any tragedy that blindsides us. Those that knew Bob, and many did, knew that he didn’t let anyone close to him; hardly ever in fact. But they knew that he was a wonderful person deep down once he let you in, and that he had helped a lot of people in the fitness industry. Lastly, he was ONE HELL of a writer and pulled a lot of strings for many deserving and undeserving people in the fitness industry.

Bob and I became very close and I thank God every day that we met, became so close and created a great project in our short time together. I will make him proud with everything that I do with 10/20/Life. Bob not only had a huge influence on me, but he believed in me.  He would never tell me this to my face, but he liked me and we clicked very well. I think about Bob every day, and I wish he were still here and could see how successful 10/20/Life has become and all of the people it has reached over the last 11months.

To be honest, the next few days after losing Bob, I was lost. Not only that, but I lost a quite a bit of motivation for a couple of weeks to really push own training and brand. I had quite a few influential and important conversations with my wife Ria, Kiefer, Scott Paltos, Allison Lockhart, Adam Driggers, Clint Smith, Jonathan Byrd, Kent Martin and Beth Thomas and a few others I hold in the highest regard. As a result; I realized that it was now time to do my thing, grow my brand, and more importantly…become healthier as my friend Bob woke me up by passing so early. I needed to be lighter in bodyweight as 295ish was far too unhealthy and I needed to become more athletic again. 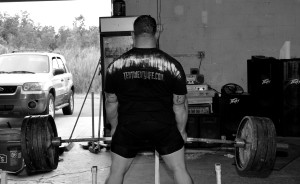 We all agreed it would be good for my brand. Bob passed May 3rd, this new idea started on May 4th and by the middle of May, I was locked, loaded and motivated.

I started walking 5-6x per week, cleaned up my food and started to come down from a high of about 295lb in the am. The weight slowly came down… from 290 to 280 was pretty easy, however, it took forever to see 270. All the while I was eating much better; a modified back loading approach. This had me fasting until 12-1pm and then eating clean food until the evening. I would then be able to eat a little bit of bad food, especially if it was after training. My diet was the first and foremost important aspect that I needed to reign in. Before, my diet was to eat whatever I wanted to maintain 290lbs or better.

Here’s an example of how I modified my diet:

By June I was 270lbs by following this protocol and I was back to strength training somewhat heavy again. I began to get the ‘fire’ back in me and the itch to get back on the lifting platform, but this time in the 242lb weight class.

Training was going well and I was starting to get back into a groove. We started to use custom meals with “Fit Meals Jax” here in Jacksonville, FL with Chad Towery, and this was a game changer for us. Prepped meals were about $100 per week and this really got me where I needed to be instead of the fast food I’d eat on occasion! The bottom line is I was still eating too much, and this helped to dial me in. Although my diet didn’t change a ton, I was eating smaller portions of carbs and not stuffing myself just because a Chipotle bowl was in front of me and I wanted to eat it all.

From July until now, here is what I had modified my diet to:

This ended up putting me at about 2500-3500kcal per day and I was very efficient this way. Some days were closer to 4000kcal, but I was consistently in a good range.

**Note – The above is an example of a non-training day. Most days I train at 6pm – so I make sure to consume enough carbs prior to training, drink Recovery BCAA’s during training with Gatorade, drink a shake after training and then dinner. So needless to say, I would eat a little more food on training days to ensure that my performance was optimal. 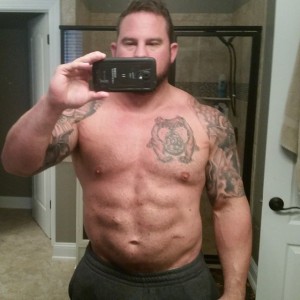 On Saturdays I train in the AM with squat and deadlift, so I eat a nice breakfast prior to training. Usually eggs, ham and grits or pancakes along with Pump Preworkout from Gameplan. Because I lift in a bodyweight regulated sport, I would go by weight on the scale, which I religiously check every single day on a calibrated scale.

By following my diet and making sure that I was eating enough to perform and lift heavy loads, I had my bodyweight down to 265lbs by mid-August. I was within striking distance of 242lbs without having to saw a leg off to make weight.

During this time, something really awesome started to happen. I began to notice in June that I had experienced NO more back tightness during the bench press as my bodyweight approached the 270lb mark. This was typically what would irritate my back. When it was time to deadlift, the extension on bench added to the flexion on the deadlift, had me reeling in pain and without any power.

I may have never found this out if I didn’t decide to get healthy again back in May and reevaluate my plan…check that…just make a plan in general. I have to thank Bob for this. It’s very fitting for Bob and his twisted sense of humor to help me out in this way. As I said earlier, he was always helping people and going out of his way for the ones he cared for, and this situation was no exception.