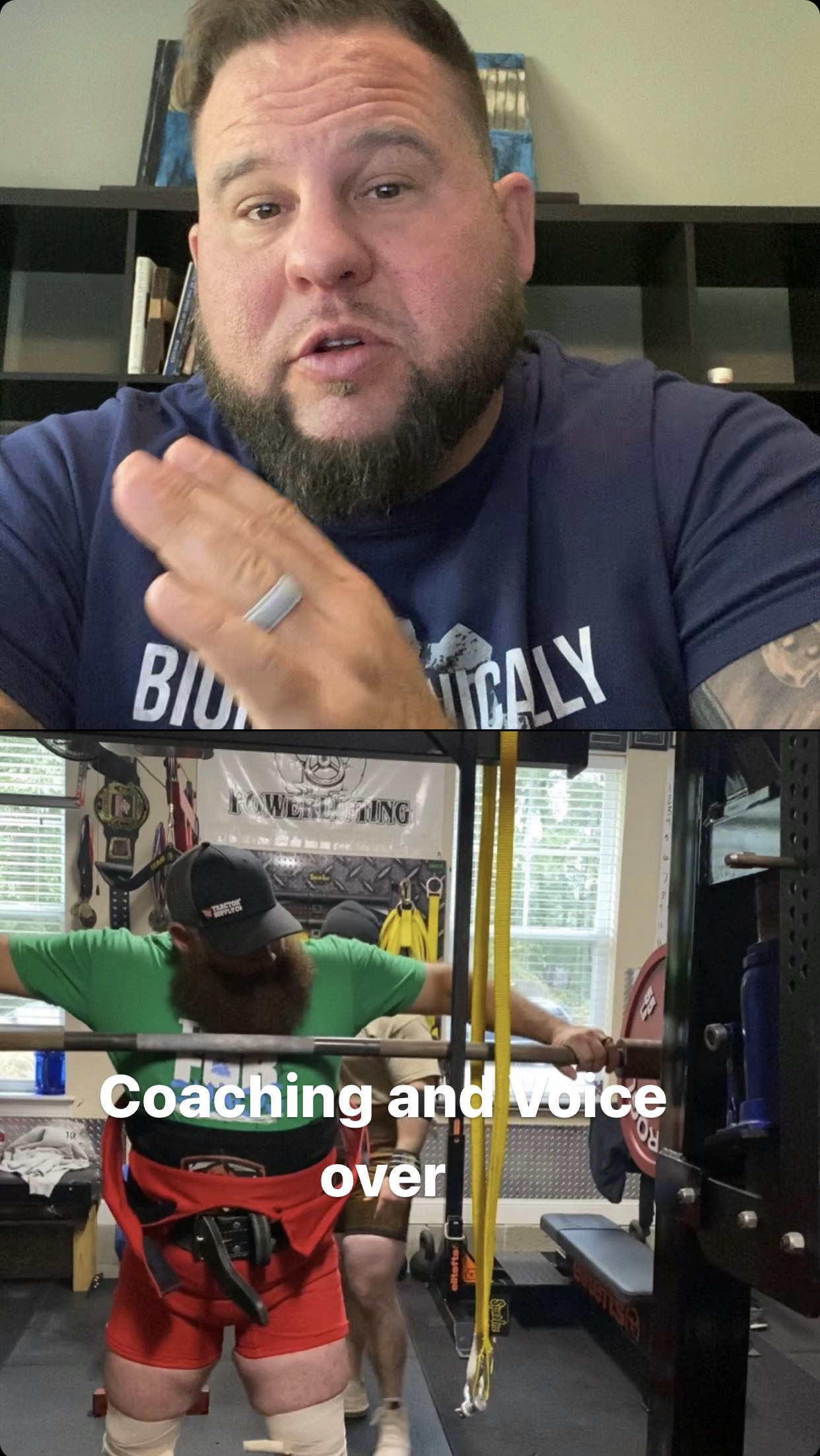 18 Dec Training, rehab and coaching my athletes with voice-over

As promised, over the next months, I’ll be updating (weekly) my biceps rehab progress, my bodyweight reduction, as well as working with the guys in the gym, as well as a few particular projects, equipped lifters I’ve taken on.

I’m looking forward to the next year and what sort of surprises it will bring us all. Hopefully, not another virus; I don’t think our families can handle much more time together! We are only one week out from Christmas, so I hope you are ready.

I hope everyone has a Merry Christmas, Happy Holidays, and Happy New year, and I encourage everyone to take an inventory of what GOOD has happened this year and focus on the good vs. the bad stuff we’ve all encountered.

Carries – as the biceps has allowed.

For the other two days, Monday and Wednesday, I’ve lifted, but it’s been very little barbell work on the bench – up to 185 5×5 – but I decided I wanted to do light DB’s the entire month of December, just for something different. I have nothing coming up, so it’s nice to go to the gym and say, “I don’t want to strain today, so I won’t.” Trust me; it’s way more fun and cool than it sounds, you should try it sometime in your offseason.

Other stuff I’m doing daily: Shoulder big 3, ROM for flexor and extensors, some triceps extensions to balance out the arm

Now you can see why I haven’t been doing too much updating. It’s very monotone and boring, but it’s the stuff I’ve needed. My arm is progressing nicely and except where the incision is healing, my arm for the most part feels normal. Near the incision, it’s a bit tender and still super tight, but doing carries and such hasn’t bothered it. I’m giving it proper rest, taking tons of CBD and my sleep is better than it has been in a long time. Actually, my sleep for the last few months has been overall better, but it’s still not great with crying babies. One thing I’ve excelled much better at this year is getting in bed early; this is due to the baby’s schedule. Sometimes I get in bed by 8:30 pm, even when I was prepping for the meet. My usual time in the past was 11:00 pm.

Going forward: I’ll be doing videos, voice-over videos, and updating and working with a few athletes here as well:

Derek Wade: I’ve made a deal with this guy that will keep him accountable and on track. He knows he has all the potential in the world but needs to save himself from himself. He’s totaled over 2500 already, let’s see what I can do in a year with him.

Anthony Hobaica: One of the easiest transitions I’ve ever been a part of with a raw to equipped lifter. It helps that he’s worn some single-ply in the past and has trained with some top equipped lifters to boot. We already made 2250 and 2358 at 198 in our first two meets. I’m excited for 2021.

Oso: Already a 1215 squat on the board. To my knowledge, it’s the only time a coach and client have squatted over 1200 in the same meet. Should be easy to corroborate since there are less than 20 1200lb squatters, ever. Maybe around 15? Anyway, he will be going over 1300, I’m pretty sure. Big things from this guy.