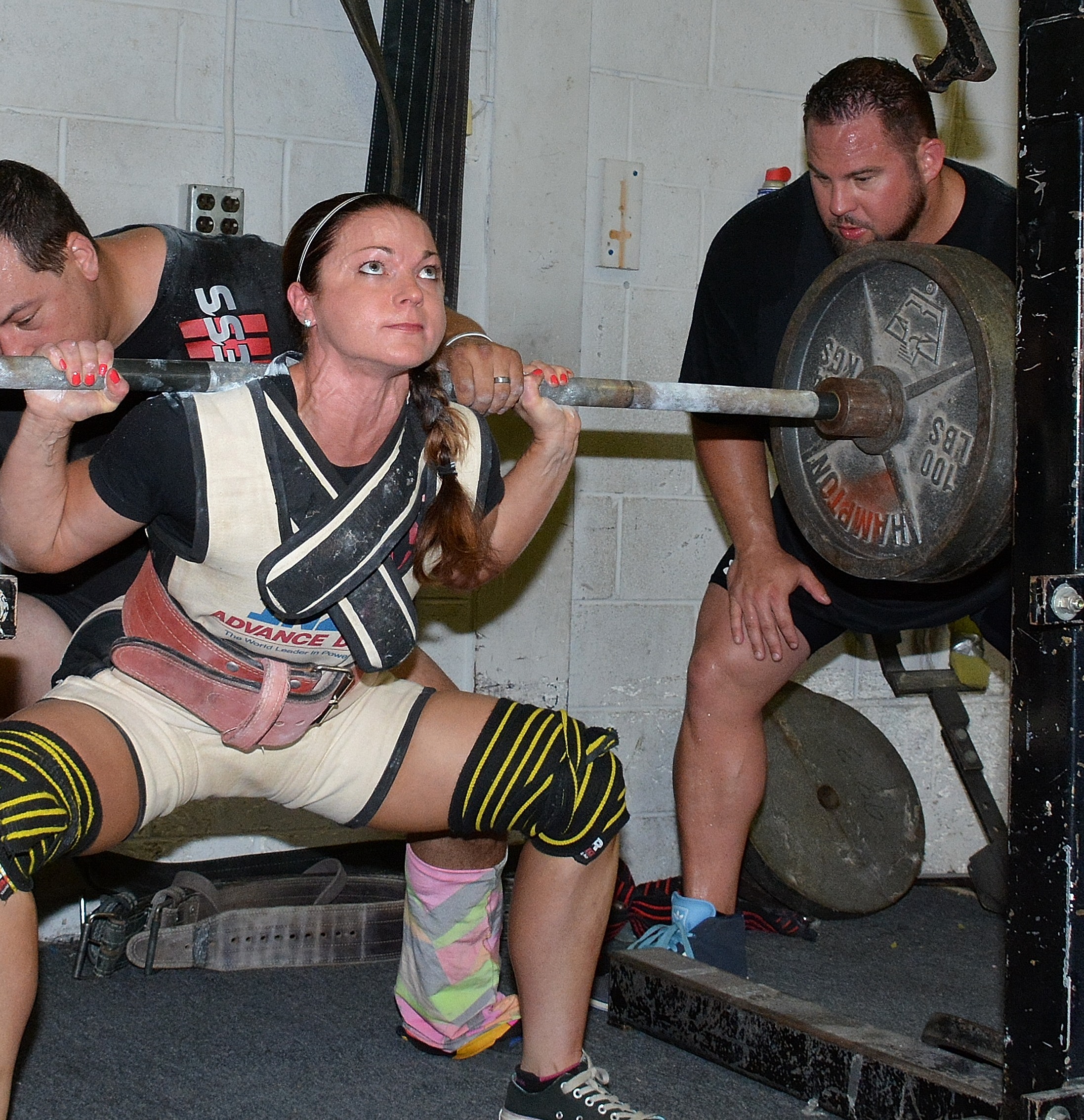 Man, am I behind. So sorry! Where to start? I took a vacation week of July 13 with the wife as we celebrated our 4 year wedding anniversary (July 17). I did miss some training, but diet was still on point.
As soon as we got back back and settled in, it was time to head to Detriot and help Daniel Dalenberg get a bench PR, as well as meet with some very cool people about some cross-promotion and things of that nature.

I have a lot of friends/contacts in Michigan, and was fortunate enough to get a lot accomplished. I had the great opportunity to squat with JJ and Beth Thomas on Friday night at Detroit Barbell – a great, hardcore powerlifting gym in Brownsville – near the Detroit airport. They so kindly let me get some pictures for PRM via Ken Richardson. I worked with Beth on her squat and bench some, and I think she is ready to PR on every lift, not that she needed much change.

Daniel Dalenberg and I then headed over to the Texas Roadhouse and threw down some steak. He ate applesauce. Don’t ask, it’s creepy.

Saturday, I coached/helped Daniel aka DD get another 500 (507) raw bench in, for his second weight class with a 500lb bench (275, now 242). Dan strained his pec major – about 3 weeks out, but STILL was able to manage a PR without injury and easy. Nice work Dan. Read here about Dan’s meet

This same weekend, a bunch of us headed over the Michigan Barbell located in Howell, Michigan, which is a very cool spot that you will be hearing a LOT about in the coming years. More news about this very soon, so stay tuned. Heather and Todd are going to do big things there.

Ken Richardson, Amy, Matt Kroc, Mike Alphabet-man, DD, Josh Mcmillian, Shane Poole, Janae and a few others did some benching and a LOT of talking. This is what it’s all about, son.

Josh and I worked up to a mid-700 for some reps and called it there. GREAT time.

ZERO TIGHTNESS OR PAIN IN BACK — even after squatting/pulling on Friday and then benching shirted on Sunday. Stoked. BW is sitting in low to mid 260’s, and I think that has a LOT to do with it.

After the training was over, we rolled over to the Deli next door and chowed down while telling some epic stories that cannot be repeated, sadly. Maybe one day!

Before heading back, I met with the Owner of Detroit Tough, Roger Dyjak, an Army Ranger, who runs a VERY cool performance gym. Beth and I did a strength/squat class/demo there, and I think it went very well. Roger’s gym has Strongman implements, obstacles, Powerlifting/strength training, yoga, and just about anything else you could imagine. And, don’t forget PRO strongman – Big Mike Caruso trains there. We hung around for a bit and talked shop, and I got to know mike a little bit. He is one VERY large mammal. I’m actually too embarrassed to post up the picture we took haha! Look for big things to come from Mike in the near future, and of course the gym Detroit Tough.

The last day, I got to meet with Heather and Ken to knockout some more ideas concerning 10/20 and MBB, train a little bit more at DBB – See John Zemmin (haven’t seen him in ages – told me I looked like I weighed 245), Clay looking like a BB and so many others there. Last thing was beers with Mike Szudarek, making fun of his Brake-less Bravada, while doing the typical giggling of sorts.

Great trip, and very productive. Kind of like an Xfit WOD – got a LOT done, fast, except safer, more fun and much more productive!

Special Thanks to:
Ken Richardson
Heather and Todd
JJ and Beth
Roger
and everyone else that was a huge help. Sorry if I missed anyone!
[share title=”Share this Article” facebook=”true” twitter=”true” google_plus=”true” linkedin=”true” pinterest=”true” reddit=”true” email=”true”][author title=”About the Author”]