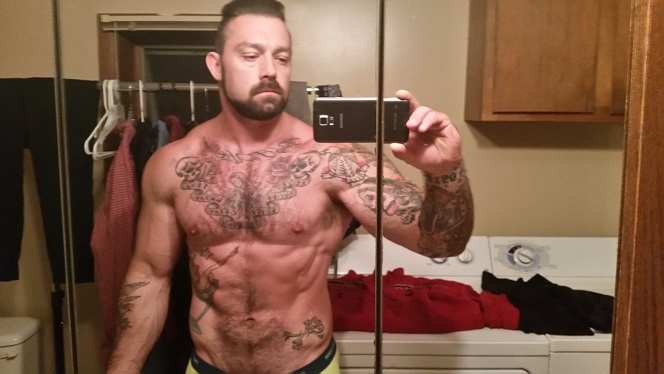 I’m currently training for the XPC finals at the Arnold Classic sports festival. My goal at this meet is to best my PR total of 2175@220. So far things are looking good…

This week puts me 5 weeks out from the meet. I got a late start on this training cycle, but things are catching up nicely. Here’s some video of squats and deadlifts:

In this video I took straight weight up to an opener range, then added a reverse monster mini band and took something around a 3rd attempt. The band takes off nothing at the top, and 90 lbs. in the hole. Depth is close, I’ll be pushing that last inch in the coming weeks.

Around a planned opener

Here’s how training actually broke down…

This one was an adventure. Dirk, Brandon, and I squatted pretty late in the evening (9pm or so) and there was a bunch of gear swapping going on, to figure out who was going to fit into what suit, etc. Not typical for 5 weeks out, but some people are fat and they need help, lol. Here’s what I did…

Suit on, straps down

My deadlift training has been nothing short of a disaster this training cycle. I’ve had a bunch of nagging injuries that just didn’t let me pull the way I wanted to (or hardly at all for that matter) and I haven’t taken the time to pull in gear (stupid, I know)… But I’ve always been good when it comes to crunch time. So this night I decided to throw on my Inzer Leviathan Ultra Pro with no briefs to pull in. Fingers crossed…

1 set of 8 reps (tweaked my right biceps a bit here, so I called it good)

3 light sets of 15-20 reps to get a bunch of blood into the biceps that I tweaked.