“This is Chris. He lifts INCREDIBLE weights and I have NO idea how.”

Brian said this to me a couple of weeks ago when he gave me a lead for my next feature. I contacted Chris and said, “So what exactly does Brian mean when he says that?” But let’s get real – does anyone ever know what Brian actually means?

Chris Ruden was born with a congenital birth defect that resulted in having only two fingers on his left hand and a left arm shorter than his right. As you can imagine, he can’t do much with his left hand (or so he says). Doctors told Ruden that he would never have much use of his left hand. “Little did they know, I would go on to play drums competitively and become a powerlifter,” Chris said. 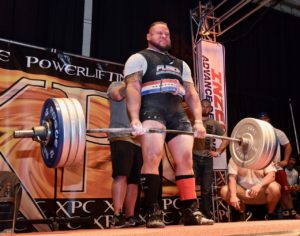 As if that wasn’t enough to deal with, Chris also has type 1 diabetes and uses an insulin pump to manage it. So not only does he have to work his training around his disability, but it also has to change regarding his blood sugar levels.

It started to become to clear to me what Brian meant when he said that he had no idea how Chris was an incredible lifter. I began to think the same thing: “HOW does this guy do it?” I know I say this in nearly every one of my articles…but everyone that I feature makes me feel like SUCH a whiny bitch.

Ruden has been powerlifting competitively for two years in the 181 class with an elite total of 1,405. He has a Bachelor’s degree in Exercise Science and until recently, he did his own programming. Chris has since started working with Brian Carroll because of his and his team’s success. “It is my belief that in order to achieve greatness, you need a mentor who has already done it,” Ruden said. “Brian is that guy”. 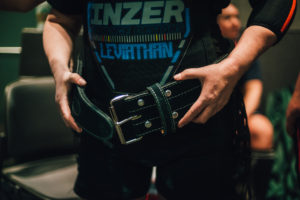 Chris met Brian at his first meet and was impressed at how down to earth he was. As time went on, Ruden continued to watch Brian and his people succeed. “Even though I was doing well, I wanted to be the best that I could be,” he said. “I know 10/20/Life will give me that.”

Chris has been on his program for just a short time, but has already experienced tremendous success. He explained that the core work alone helps his imbalances due to asymmetry tremendously. Ruden deadlifts 600 pounds with seven fingers and uses a hook on his left arm to do so.

Lifting aside, Chris is a Sales Director for a gym and runs his blog www.7fingeredfitness.com, where he makes educational, motivational, and sometimes-humorous posts. He describes himself as “somewhat of an entrepreneur” and is currently developing a mobile app. Additionally, Ruden has a side therapy business for children with disabilities; he was featured in the news for helping an 11 year-old walk on the beach for the first time.

But wait – there’s more. He represents I Am Adaptive, a non-profit organization that aims to motivate and inspire the adaptive and veteran population. They accomplish this through events, charity, and exposure in order to assist people physically, mentally, and emotionally. Chris was recently added to their international competitive team. “They are relentless in their pursuit of equality for all and help so many people in need,” he said. “I’m very proud to represent such a selfless organization and help motivate adaptive people around the world.”

Ruden has had to spend time learning to adapt in order to even do basic movements, let alone be competitive. But he makes it work and he makes it work well. Chris told me that “limitations are self-imposed” and he is an excellent testimony of that statement.