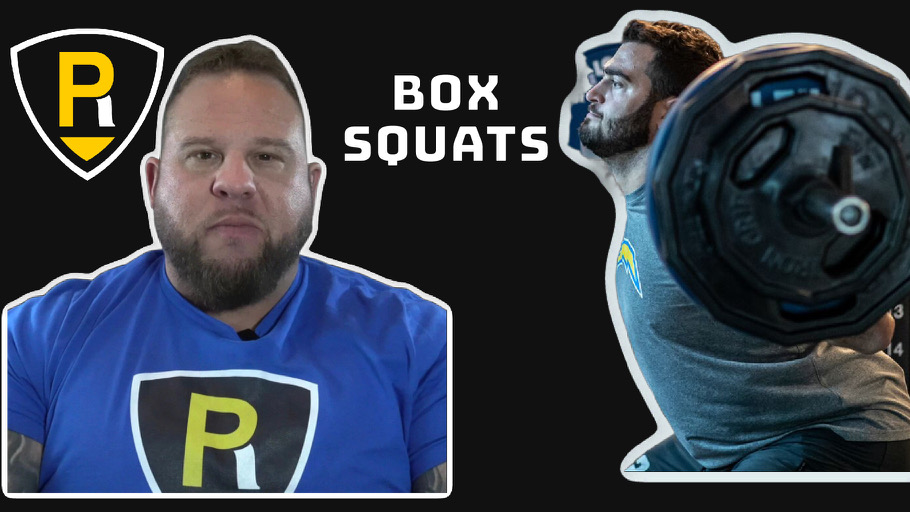 Box squats are a handy tool many athletes and powerlifters use to build their athletic power in the lower body and core. In this article, I will discuss who I think should be box squatting and why I believe professional athletes should use different variations of the squat but not in the way powerlifters do. Remember, every exercise is a tool, and the proper application for a specific case must be considered. The athletes I’m talking about are “million-dollar” and not powerlifters.

Who should box squat?

I’ve been fortunate to work with the NFL and NFL strength coaches on the big three lifts (squat/bench/dead). I’ve also had the opportunity to discuss, consult, teach and learn how they prepare their athletes for the games. In 2018, I did a seminar in Las Vegas with Dr. McGill, where we worked with all of the strength coaches in the NFL. NFL athletes don’t need to touch their butt on the ground with squats. They don’t play football that low, so why should they squat that low to the ground? I believe the box squat is a remedy for the problem. Depending on the player’s position, build, and height, they should squat accordingly to the box and not lower. Most set-ups I’ve seen in NFL training rooms have been anywhere from 3″ above parallel to 6″ or more. Again, depending on the group, the coach, where they are in the season, and their positions.

The juice has to be worth the squeeze

Some strength coaches get lost because these tremendous and robust athletes are not powerlifters. They are football players (or name it) and should be trained as such. It’s not a lifting contest; it’s a football contest. It doesn’t matter how much they lift if they cannot play on the field.

During the squat, One way to keep everyone on the same page is to squat in groups according to position (unique demands) and build. For example, linemen shouldn’t be squatting with the DBs and running backs while going to the same depth on the box squat. A set-specific range of motion works well for training in a team atmosphere where time is limited, and things must move fast in group training. I think squatting above parallel to a box for football players is something to consider, and I know many programs that implement high box squats for the main leg movement. In Gift of Injury, Dr. McGill and I discuss the box squatting of athletes in more detail.

I feel that many athletes don’t ever need to have a bar on their backs often, if ever. This pertains to the NBA, NFL, UFC, and many other athletes that aren’t POWERLIFERS. Some athletes can get away with front squats or other variations like Goblet squats and get all they need out of the movement.

On the other hand, some athletes are close to 7′ tall and have an all-legs build, while others are closer to 5′ tall. What are you doing to train these two polar oppositely built athletes differently?  Seven footers? Not exactly the body you want to deep squat, maybe the punt returner at 5’3, 165. You can even take a heavy KB and goblet squat to a box for the taller athletes. Do we need to take it a step further and require more load? Add a KB goblet variation to a belt squat, squat down to a pre-set box, and explode up.

While some can squat to a box with a bar on their back just fine, others don’t have the ability to do so safely. Remember, if they aren’t powerlifters, they should not be training like one. The end goal has to match the chosen exercise and answer the question: will this improve me? If not, keep searching for a better tool.

For those looking for coaching, programming, or consulting, feel free to reach out to Brian Carroll HERE.