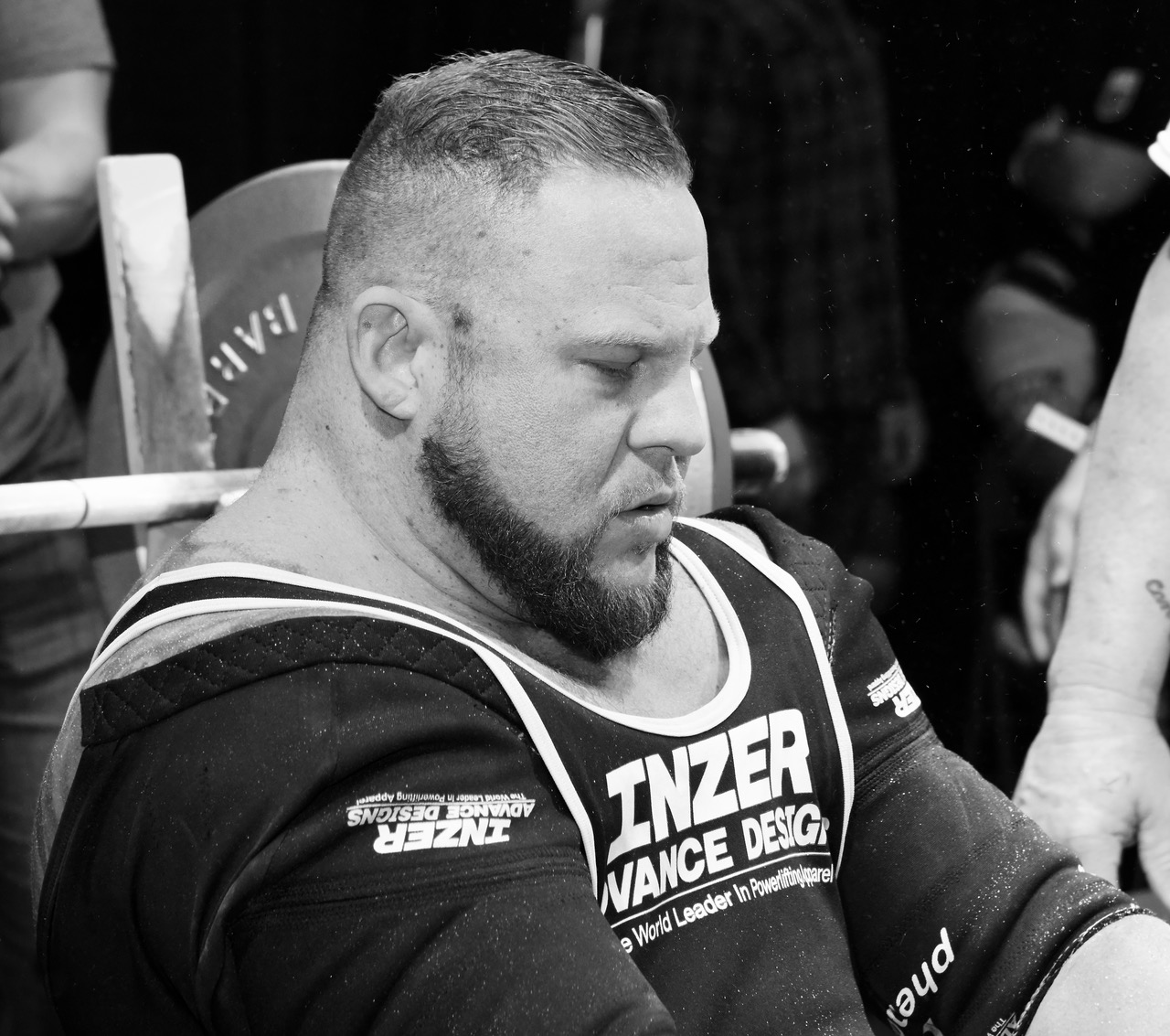 If getting strong is your passion – I mean genuinely is – you’ve focused on getting super-human strong for over ten years relentlessly; you need not tell people it’s an essential component of your life. You make it a priority without excuses, and people notice this. I’m not talking dabbling for a couple of years, then switching from bodybuilding, CrossFit and distance running, mud runs, to general health and wellness, etc. I mean being all in for strength. You’ve beat your body up, lost your aesthetics long ago, because they mean NOTHING in powerlifting/strength training and typically only hold you back (think about chasing two rabbits). But I digress.

Regardless of whether it’s a convenient, or not, how boring it can be at times (it sure can be) and monotonous in the offseason or training when there are 100 other things you need to be doing, you do it because it’s a part of you. I’m about to go through this with Rylee and Reagan come into our lives in April. I’m positive I’m going to be tested, changed, and who knows what else. I do know that with twins, it’s going to be very challenging to still get my training sessions in. It’s going to take away potential time from my training if I let it. But, I’ve prepared for this day, long ago. I can sneak away to the garage and train without having to drive to train and save a bunch of time. I have dependable training partners that will step in for me, and I’m grateful. Training is a constant in my life, and that will not change, even if I have 11 children. People that genuinely know understand this won’t change.

Dave Tate told me in our recent podcast that being a dad won’t change me enough to want to stop lifting heavy, which made me relieved. Many other people have said the same thing about this subject. Dave said that once you’re a meat-head for 25 years, it’s a done deal, you aren’t likely to change that much. It’s hard to relate to people who treat strength training as a hobby or as a tourist. There’s nothing wrong with this, but it’s a different mindset and commitment. I used to butt heads with people at Samson so badly because outside the core group; some were not all in. It drove me crazy to see them down-play the importance of reliability and commitment to something. And how little they understood that all of this stuff, regardless of their naivety, would frustrate me too, as think it’s equivalent to a flag football weekend tournament.

To be all in, without any data other than anecdotal evidence/experience, it may not be a stretch to say that if training is not a top 3-5 priority in your life, then it’s not essential to your life, and you can take it or leave it. I say my relationship with God, Wife/children, then training, then work rounds out my top 4 if I’m honest. In the past and, at times, it was #1 for me. It was my God, and unfortunately, you’re setting yourself up for failure; it can’t be the only reason you live forever, something has to give. It’s not stable or reliable. But that doesn’t mean you have to keep it number one and can *balance* things out the best you can. (I have struggled with this – but the advice I got from Dave Tate in the video above has been a great help.)

Teetering back and forth from crazy-obsessed and less crazy-obsessed is something that I’ve been struggling with and thinking on for a long time—more in the last decade. First, let me say that I’ve done a lot of things for and in powerlifting/concerning powerlifting that I’m not proud that I did. I’m not proud of, but I wouldn’t change it knowing what I know now and where it took me. I also know that most people in the world, maybe even in the powerlifting world, do not take powerlifting, training, etc. nearly as seriously as I have and do. I understand this now more than ever. For the longest time, I didn’t think that anything could be enjoyable outside of powerlifting. But, I’m still crazy about it in all the ways. I have been for decades, and that won’t change. I remember telling Ria, like an a**hole, that when we first met, powerlifting is #1 in my life blah, blah. The sad part, it was. But that has been addressed too. I’ve been better about turning it on when I walk out into the gym, then turning it off when I come inside. Change of location has been quite the adjustment for me after training with the same crew at the same place for over a decade and a half.

I remember some of the stuff I’ve done and said in training that was absurd. Before I set the All-time squat record with 1185 at 275 in August of 2011 (link to actual EFS Log), I was struggling terribly with my bench in the Ace Bench shirt. I’d hurt my shoulder two years prior (similar to what I did two years ago again), and I would struggle from time to time. My squat was taking off like a rocket, but the extra torso-stiffness required to peak in the squat flattened me out on the bench and caused me loads of issues. Shoulder issues and not arch really will keep you from benching big if you let it. Especially equipped.

The entire training cycle was a disaster at best. We were two weeks out, and I couldn’t touch anything. I took 750 to the touch and just missed it. So, I retook it. Couldn’t touch. Now I was panicking and getting crazy, “if I don’t touch on this 3rd one, I’m not doing the MF meet! This one wasn’t even close, so I went into the corner and talked with myself. I came up with a careful strategy of threatening to kill myself if I didn’t touch, and the guys agreed that I should if I didn’t. I thought I meant it. I didn’t touch and didn’t hurt myself, I just threw a fit that night and then went and had my highest total to date of 2730 at 275. I went into this meet crazy; But, I had enough sanity and clarity to take a token bench of 135lbs after my WR squat. I wasn’t THAT ridiculous – I’d kill myself before I bombed out, makes sense. I’ve thrown my gear on the gym roof before and left it there, flipped over benches, and went home; then, like a real punk-ass came right back during a session and apologized because the training was that important to me. I probably would have kissed all their feet and flogged myself if it meant them, allowing me to get a session in after the theatrics. I have to say, I learned the flipping over stuff from Adam Driggers as I’d not considered that before. He was pretty scary.

I tell you this tongue in cheek; I think it’s hilarious how ridiculous I’ve been. I also think it’s fun to say on myself, honestly. I’m not trying to sell you on how hardcore, dedicated or stupid I am, what I’m trying to do is save you from a lot of extra headaches and anxiousness; if you feel you can relate to me by how much strength training means to you, that’s great. Don’t even bother trying to explain it to people; they can’t get it. I would just make up something else or change the subject is engaged. “How much does being a professional powerlifter pay you, Brian?” Uhhhh, well, you see, I don’t make very much money doing it, and it costs me XXX amount to enter meets, etc. They are like, uh, what? Yeah, it’s easier just to lie and tell them it’s your job.

Keep in mind your family, friends, and even significant others may not and will most likely NOT get why you do what you do. I know this because I don’t always get it, but I continue to do it. You must give your significant other a break from time to time, something I didn’t do in the past. This was a big help from Dave Tate back in 2012 (video above). They may get that you love competing, but they don’t realize how much you sacrifice when strength is the number one goal. Also, find someone who will support your craziness, and not try to sabotage you. I’ve had clients whose wives would try to make it as hard as possible for them to succeed, i.e., putting chocolate all around the house so they wouldn’t lose weight, etc. Don’t expect to be at your best if they aren’t down with your passion. But, please, do it differently than I did. You can’t make anyone do anything, but maybe you bribe them.

Your physique will suffer, relationships will suffer; you’ll isolate yourself from people outside your lifting circle, usually because they don’t understand what you’re going through, along with your goals. But it’s part of it, either you get it, or you don’t.

So when you miss family gatherings often or miss your best friend’s Friday night Christmas party five years in a row due to squat training obligations — at least they -kind of- understand that you are crazy. As chasing numbers in a sport that costs you time off your life, time away from your family, and hits you financially is CRAZY. And hopefully, at least you’ve given them fair warning.

So don’t expect them to get it. Surround yourself with likeminded people and push as hard as you can, while you can – because all of our time is limited and next thing you know – your time has passed you by, and it’s too late. But don’t isolate yourself too bad, because this isn’t good either. Let me know when you find the correct amount of balance because I’m still looking.