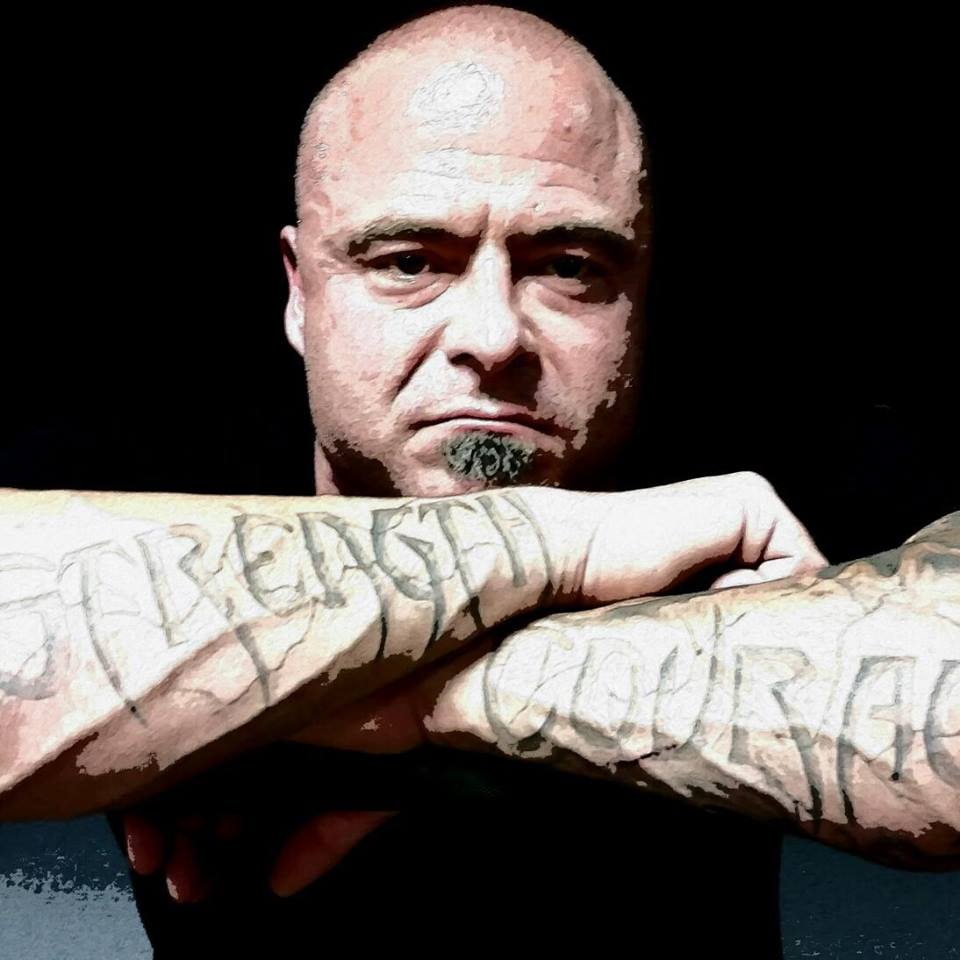 By Ken Whetham/Friends of PRS

It was during my preparation for the 2014 WPC World Championships in West Palm Beach Florida when I realized that the back pain I was experiencing during training was more than just a pulled, or strained muscle.

Light squats during warm-ups were fine, however every time I started to squat more than 400 lbs, upon re-racking the bar I would get a sharp, stabbing sensation in my mid-back that felt like I was getting skewered with two ice picks.  Most of the time I would try and make it through a few sets of doubles, or singles, but the majority of the time the pain forced me to stop my squat training.  I would usually pull after squats, but when I tried to pull even a couple of plates, my back would spasm and I wouldn’t be able to continue.

I made it through the competition and won my division, but I was frustrated that my training was suffocating because of this irritating back issue.  Ironically, I initially contacted Dr. Stu McGill by email before I knew him and tried to get into see him.  He was extremely busy and wasn’t’ able to see me at the time.  I started to get some regular acupuncture and chiropractic treatments from my good friend, Dr. Ken Kinakin, which really helped me deal with the issue and somehow we managed the pain and found a way to train, although training was never optimal because of the limitations I was experiencing.  The less often I squatted heavy, the better my back felt.  This back pain issue was continuing to various degrees for the next three years and several competitions.  There was a period where I didn’t deadlift for over a year except in competition.  I just hoped for the best and dealt with it. 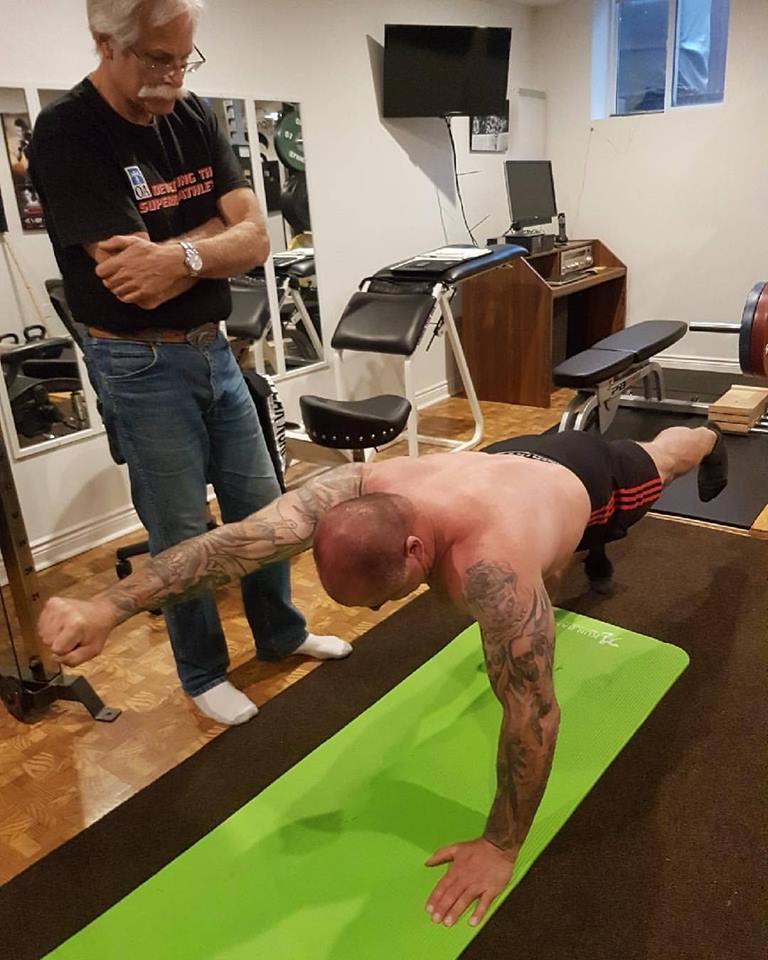 Even though my back seemed compromised the majority of the time, I was still able to hit a 940 lb squat and a 705 lb deadlift in competition.  I took some time off after the 2017 Arnolds to really work on building a better foundation.  Off-season training was going really well and I didn’t have much pain because I was doing the majority of my squat training volume on the belt squat.  I started deadlifting again and my pulls were starting to get a lot stronger.  I decided to do a meet in December of last year and as soon as I started to squat heavier, my old friend back pain reared its ugly head.  I was four weeks out and was supposed to squat 900 lbs for two singles and when I hit an 825 before my final sets, the pain in my back crippled me.  I had several conversations with my training partners and my wife on numerous occasions that I thought I was done competing.  I couldn’t handle the pain anymore and I was reluctant to continue training through it.

In the mean time, I had met Dr. Stu McGill and we became good friends.  He travelled to my gym a couple of time to do some photos for a Men’s Health project and subsequently for some pictures for his new book project “Gift Of Injury” with co-author Brian Carroll. 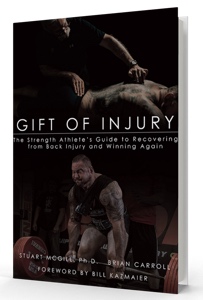 I emailed Dr. McGill and told him about my stabbing back pain and he replied, “I’m home this week, come and see me.”  I drove to Stu’s house the next day in northern Ontario to meet for an assessment.  Stu is one of the most amazing people I’ve met.  He did a lengthy assessment and found I had two bulged discs and a reverse hook nerve impingement.  Stu told me that he was 100% confident I could be completely fixed if I followed his specific “prescription” for my particular issue. 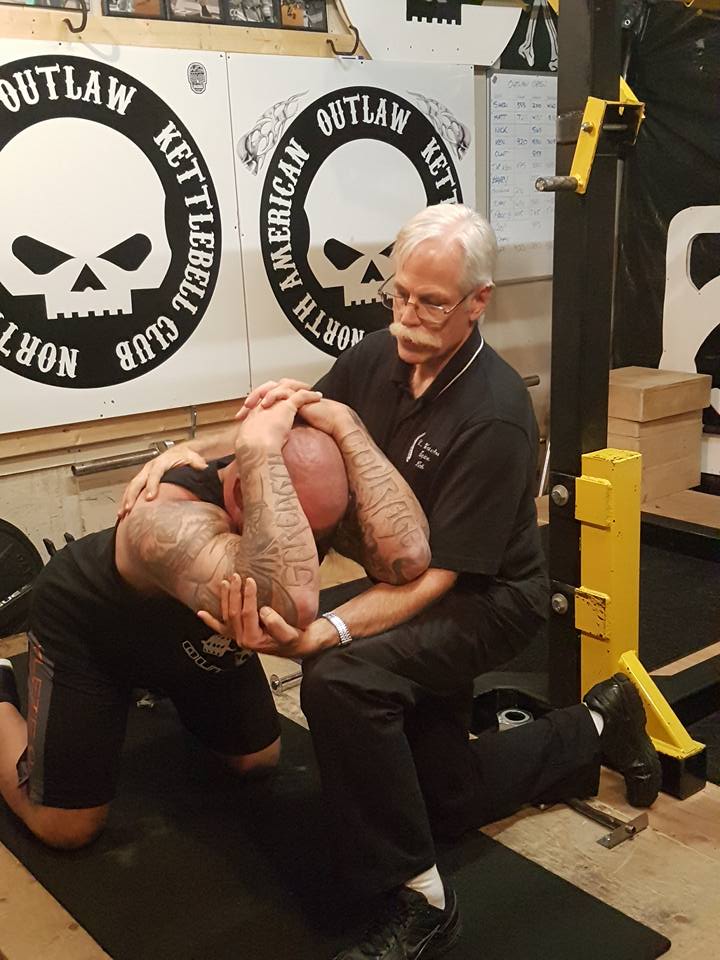 My specific protocol from Stu consisted of 8 weeks of NO lifting and:

I promised Stu I would comply with his protocol and I did, religiously.  For the first couple of weeks it was actually tough.  I wasn’t used to the movements and it took a while to feel comfortable.  After two weeks I started to add reps and sets with the birddogs and planks and every week I increased the weight of kettlebells by 2 kilograms.  I reached out to Brian Carroll to ask him about how to transition from the rehab protocol back into lifting and he described a very gradual transition over several weeks.

When I was able to start loading my back with some weight, it was very slow and gradual.  I started squatting with a 25 lb plate on the bar for singles.  I squatted twice a week with the same weight and progressed by 30 lbs every week.  I didn’t have any back pain, but the weight was light and I didn’t want to be too aggressive and sabotage my recovery.  I was eventually squatting 200, 300 and 400 lbs for doubles without any pain.  I gradually tested my back a little more and more and kept in touch with Stu to make sure I wasn’t overstepping my recovery.

A couple of weeks ago, I did my first heavy (ish) training session and squatted 5×2 with 615 lbs!  I was amazed that my mid-section felt bulletproof and I had ZERO pain whatsoever! 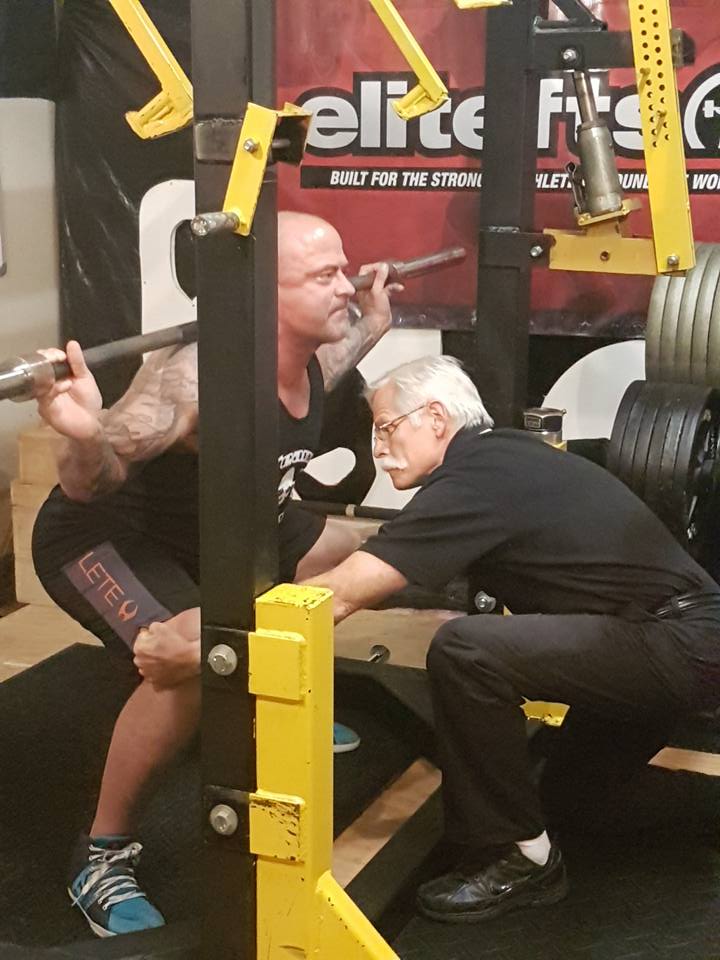 Fast forward to last weekend.  Brian contacted me to see if I was interested in attending Westside Barbell in Columbus, OH to squat with him and Dave Hoff?

YES!  I was excited and nervous at the same time because I honestly didn’t know what to expect.  I had talked with Stu again to let him know I was going to train with Brian and he said I was ready for the “green light”.

I travelled to Columbus and spent two days with Brian and Hoff and training was spectacular to say the least.  It was the first time I was in the suit for a few months and I ended up squatting 825 lbs without any back pain!

Throughout this process I realized several things: 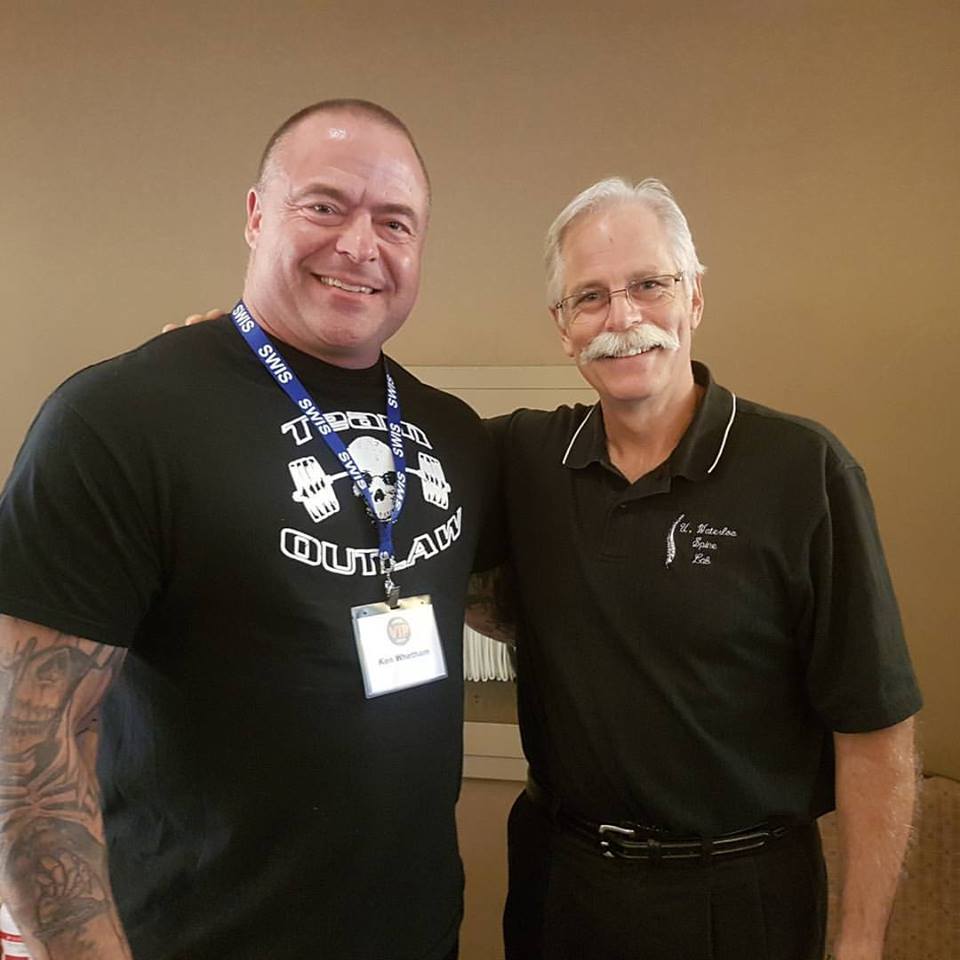 Stu told me that most people don’t have the discipline to follow the protocol.  It takes determination, consistency and patience.  For the first time in over three years, I can squat and deadlift without any pain and every time I finish a squat, I can’t believe I’m training without any pain.  I can’t thank Dr. Stu McGill and Brian Carroll enough for helping me recover from an injury that almost finished my lifting career.

Pick up a copy of Gift of Injury by Dr. Stu McGill and Brian Carroll and start your own road to back pain recovery.